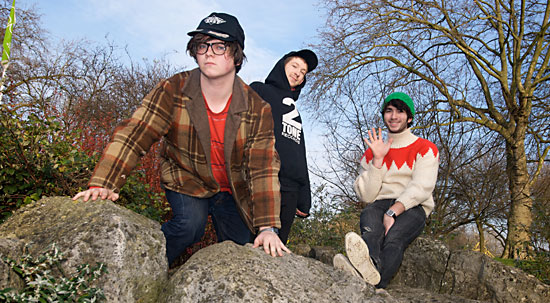 Merge Records just released Let’s Wrestle’s debut studio album, In The Court Of The Wrestling Let’s, which boasts peculiar songs about subjects like “getting a job so you can buy girls drinks at clubs, a really famous crack addict, and how bass player Mike Lightning’s hair looks like Princess Diana’s from the point of view of a homosexual man who is in love with the dead princess.” (We couldn’t make this stuff up if we tried.) While the album is primarily based in punk rock, the London trio claims to pull from a variety of influences, many of which show up on this mix tape Let’s Wrestle frontman Wesley Patrick Gonzalez made for MAGNET.

“We Are The Men You’ll Grow To Love Soon” (download):
https://magnetmagazine.com/audio/WeAreTheMenYoullGrowToLoveSoon.mp3

Paul McCartney “Temporary Secretary”
This has become an unofficial Let’s Wrestle theme song, constantly played and loved. It’s even my ringtone, and everyone who hears this is blown away by the mystical powers of Macca. Video

Harry Nilsson “Me And My Arrow”
From one of the best albums ever. We got introduced to The Point! whilst traveling through Baltimore last year. Video

Black Flag “TV Party”
Best song ever. We used to try and organize TV parties, but they were never as good as the video for this looked. We’ve got nothing better to do than watch TV and have a couple of brews!!!! Video

Denim “Middle Of The Road”
Lawrence backed up by the Glitter Band—is there anything cooler? This song is about hating every type of music apart from the Lighthouse Family. Video

Race Horses “Last Boat To Dover”
The most Welsh thing I’ve ever heard. It starts like Emerson Lake And Palmer, sings about gay love, then hits you with a wonderful chorus. Audio

Yo La Tengo “Stockholm Syndrome”
Lovely vibes from the Tengo. I really like James McNew’s high vocals. (They don’t get put to full use in my opinion.) Video

Patience And Prudence “Tonight You Belong To Me”
Mike and I used to sing this to each other constantly. It’s from one of the best films ever, too: The Jerk. Video

Bikini Kill “Suck My Left One”
I just really like this song. Video

The Pixies “Velouria”
No other song will ever come close to how good this song is. Video

How cool. what a great mix!

are these kids serious in those outfits? hipsters = new frat boys.

i really like this song. i am banned from singing it at home due to my limited range and insistence on singing while wearing only a cape and socks.

They could easily be mistaken for homeless kids waking up in the park. But now that they’re under Mac’s wing at Merge HQ, he needs to take them clothes-shopping. Least he could do.

I’m tired of people whining about musicians look, they aren’t models are they?
Music is for ears not eyes!!!!!!!

If you wanna look at someone go to a fashion show