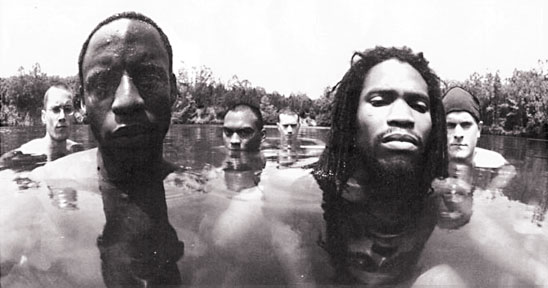 One night in 2003, I headed over to the Fire, where my friend Mutlu was performing later that evening. To this day, I’m beyond grateful that I happened to showed up early. The opener, Infectious Organisms, held me and the rest of the crowd fixated with riveting portraits of love and loss, of the effects of the inner city, of the struggles to overcome personal demons for the sake of your loved ones. The wildly energetic and gifted frontmen—MCs Felton Martin and Jean Baptiste—were backed by stellar musicians who delivered tightly crafted grooves and ambient soundscapes reminiscent of Lamb, Massive Attack, Morcheeba and even Sade. This was hip hop that not only kept your head bobbing, it could also move you to tears. The album they were promoting, Human Experience, is to this day one of my favorite hip-hop albums of all-time.

I ran and told my friends and found myself describing the music as almost cinematic hip hop. Martin and Baptiste told gripping stories that kept you on the edge of your seat, and the sonic atmospheres created by bassist Dave Sunderland, drummer Will Blair, guitarist Brooke Blair and keyboardist Mike Mathews were the equivalent of perfectly crafted scores. The musicians knew precisely how to complement the development of a story: a young girl who falls into drug addiction and prostitution; a surrealistic portrait of love and loss that would make Leonard Cohen proud; an absorbing discussion of Columbian drug lord Pablo Escobar’s system for smuggling cocaine into the U.S. in the ’70s and ’80s. Your mind created vivid picture scenes, and you felt what these characters were going through and wondered what the world held in store for them.

When Martin and Baptiste weren’t spinning a compelling narrative, they were baring their souls and battling their own demons. One of the most reflective moments of Human Experience comes on “Beautiful World,” where gorgeous guitar swells and ambient keyboards float over a deeply hypnotic groove and boldly exposed lyrics: “Now, who wants ya when your soul’s controlled by a monster/And what’s the possibilities when you see your life before your eyes … I’m tired of living but scared to die/At times, I can’t identify/I lost myself a long time ago, the reasons why a man can lose his sanity/Guess it’s simply the man in me, or maybe from a lack of male figures in my family.”

Inevitable recognition and critical acclaim followed, and the band went on to share the stage with revered artists including Medeski, Martin And Wood, the Roots, Black Star and OutKast, among others. Unfortunately, internal struggles led to a break up just a few years later.

But every crisis brings new opportunity. Sunderland and the Blair brothers have gone on to form East Hundred, one of Philly’s most promising and talked-about bands. East Hundred—a driving, female-fronted outfit that combines the edginess of Blonde Redhead with the elegant pop of Company Of Thieves—is quite a departure from Infectious Organisms. But what is consistent is that these guys are continuing to do what they do best: providing breathtaking sonic tapestries that turn a promising lyric into a great song.

i used to watch infectious in the late 90s in southwest virginia – – they were originally from Richmond – & then started booking them to play at Swarthmore College in 2001. the whole campus always flipped for them.

one important detail this article does not note is that Jean Baptiste has been busy. he now writes for the black eyed peas, rihanna, chris brown, & a number of other stars. congrats to him !