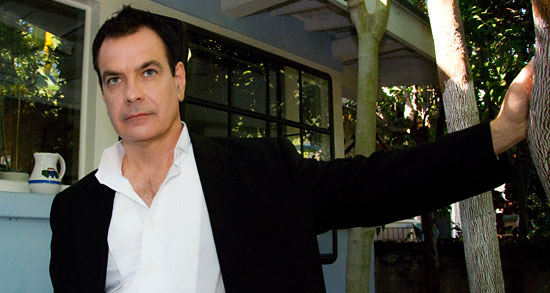 Over the course of a quarter of a century, Wedding Present and Cinerama auteur David Gedge has consistently documented the intricacies of interpersonal communication, mostly of the romantic kind. (Representative sample: “Was it really too hard to tell me to my face that you don’t long for my embrace?”; “Be Honest,” from 1989’s Bizarro.) While currently writing new tunes in his tradition of celebrating romantic bliss and bemoaning lost love, Gedge is also revisiting some old flames. His label, Scopitones, last week released Live 1988, a double album of concert recordings from—you guessed it—1988, the second in a series of LPs (2007’s Live 1987 was the first) collecting live cassettes that were sold at gigs and through their fanzine in the late ’80s. (The record will be available only in stores and at shows for the time being.) The band is also playing Bizarro, arguably the best Wedding Present effort, in its entirety during a tour that kicked off April 1 in San Diego. MAGNET talked to Gedge while he was taking a break from rehearsing and building up his cardio endurance. Gedge will be guest editing magnetmagazine.com all week. Read our 2005 career overview of the Wedding Present.

MAGNET: I hear you have an amazing memory. I interviewed you for MAGNET back in 1995. You probably remember it as a great one, right?
Gedge: [Laughs] Yes, of course! That interview was legendary. We still talk about how momentous it was in the Gedge household.

At that time, we talked about how your lyrics generally involve relationships. Since you’re on Twitter, what is your take on how Facebook and Twitter affect interpersonal communication?
Well, they’re obviously useful in keeping in touch with people who you wouldn’t normally keep in touch with. But, as a result, I think people are speaking to each other less now. Nowadays, everyone seems to have their head continually buried in a laptop or iPhone updating their chosen social-networking site. It’s incredible how rapidly the changes have taken place, too. It was only a few years ago that I was the only person in our entourage with a mobile phone. Now everybody is on Wi-Fi and has about half a dozen different ways of keeping in touch with each other.

Was it your idea to play Bizarro in its entirety live, or did you have to be convinced? If it’s the latter, how much convincing did it take?
It was my idea to play Bizarro live, yes, but it’s a bit more complicated than that. In 2007, the idea of playing our first album, George Best, was put forward to coincide with the 20th anniversary of its release. I was actually not in favor of the idea because I was more interested in working on new songs and new recordings than looking back, but everybody I spoke to—fans, band members, friends—thought it was too good an idea not to pursue, so I kind of reluctantly went along with it. But then in the end, I was glad that I did because I found it a fascinating project and quite strange to revisit a period in your life that you’d forgotten about. I think Bizarro is a better album than George Best, so having enjoyed doing it with our first album, I decided that we should do the same with the follow-up.

There’s a lot of frantic guitar strumming on Bizarro, songs like “Kennedy” in particular. Twenty-plus years later, how worried are you that you might need frequent breaks during the shows?
I’m not going to deny that it’s a challenge! With Bizarro, we took the original idea of the Wedding Present—namely, to play songs as fast and for as long as possible—to its logical conclusion. As a result, it’s a collection of fairly extreme recordings, and obviously, we’ve never played them back to back like this before. Rehearsals have been more like training sessions for a marathon, but I have no doubt that we’ll get there in the end.

Bizarro is probably my favorite Wedding Present record. Do you think it’s the band’s best LP?
I find it impossible to compare Wedding Present albums because they all really have their own personality and style, and there’ve been so many different lineups now that it really is like trying to compare chalk with cheese. I think as an artist you’re obviously most happy with the work that you’ve just produced, because that’s closest to your taste at the moment, so I would have probably said that (2008’s) El Rey is the best Wedding Present record—except that we’ve just started writing some new songs which are exciting me even more.

After Bizarro was released, or even during its recording, what sense, if any, did you have of what you accomplished?
We just set out to make a record that solved some of the problems we’d had with our first album. So we had better songs, better equipment, better studios in which to record, more of a vision of what we wanted, and also we obviously had the experience of having been in the studio before. So we achieved our goals, yes.

You’re playing in Japan in May. How well-received is the Wedding Present over there? I’m wondering because, unlike some bands, your lyrics are probably as integral to the band’s appeal as the music.
We have a decent following over there, yes. I often wonder how much of the text that they actually understand, but it really doesn’t seem to dilute their enthusiasm for the group. It’s very common for lyrics to be translated into Japanese and included in the LP sleeve, so maybe that helps.

How do you feel about the label selling the Live 1988 record only in stores, though I assume they’ll be available at shows? Does it matter?
Well, seeing as I own the label and it was my idea, I feel happy about it! I just decided that it would be nice to make a little contribution to help record shops, who are obviously struggling more and more these days. I’m just such a giver! It will be available at the shows, though, yes.

Oh, it’s your label. Sorry about that. Anyway, you had that roughly nine-year period between Wedding Present records, when you did the Cinerama stuff before returning with the Wedding Present on 2005’s Take Fountain. Why did you put the band on the shelf and why re-start it, especially since Cinerama is still active?
I started Cinerama because I felt like I needed a little break from being in the Wedding Present and I had some musical ideas that were very different from what we were doing in the band at the time. I didn’t want to drag the other members of the Wedding Present with me, so I decided to start my own project. I didn’t envisage that I’d be doing Cinerama for nine years, though. At the time, I thought it would be something like nine months, but it took me longer than I thought it would to acquire the skills of writing and arranging what was a very different type of music for me. Getting my head around the technology of working with computers and samplers took a while, too. But then I discovered that I quite enjoyed the freedom of having my own way all the time, and so Cinerama went on to record three albums. Over those nine years, though, the Cinerama recordings began more and more to sound like the Wedding Present, which was I suppose was down to my love of guitar music, so ultimately we completed the circle and found ourselves back where we started. At that point, it felt like time to do the Wedding Present again.

You curated the At the Edge Of The Sea festival last year that featured the Wedding Present, Cinerama and other bands. Apparently, it went well enough that you’re doing it again this year in August. What was that experience like?
It was a lot of work! [Laughs] But I’ve got to say it was one of the most enjoyable days I’ve had in all the years I’ve been working with music. It was basically just a Wedding Present concert, but we managed to extend it throughout the day and throw it open to either favorite bands of mine or friends of ours. We were very lucky with the weather, and everything just clicked on the day. It was a great place to be, and the atmosphere was fantastic.

[…] the nearly ten minute “Take Me!” that might be the band’s most manic song ever. Magnet asked frontman David Gedge, who turns 50 on April 23rd, a question I was wondering about. Magnet:There’s a lot of […]