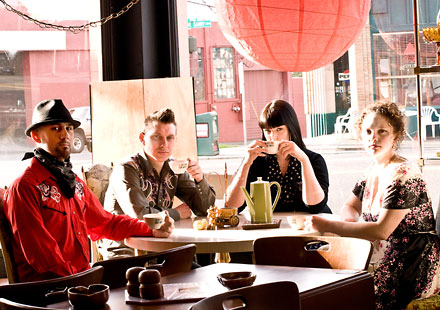 After time living on the streets, doing drugs and causing havoc, David Frederickson turned his life around and married Mistina La Fave. With no prior experience, they each bought a guitar from a pawnshop and learned how to play. The end result was magical: They became the Prids. Now divorced, vocalist Frederickson and bassist La Fave moved to Portland, Ore., and joined up with drummer Lee Zeman and keyboardist Maile Arruda. While driving from San Francisco to Los Angeles two years ago, the band was severely injured from a tire blowout on the freeway. The van rolled multiple times, smashing their equipment and demolishing their van. With the help of their devoted fans, they raised more than $16,000 to replace it all. They’re seriously lucky to be alive. The Prids released their first EP, Duracraft, in 2000, and their discography now numbers 10 releases. Their latest album, Chronosynclastic (Velvet Blue Music), will be released June 11, and Doug Martsch (Built To Spill) contributes vocal harmonies and virtuosic guitar. MAGNET is proud to debut “I’ll Wait,” which mixes the Chameleons’ atmospheric psych pop with Pixies-esque male/female vocals.

[…] Now you can download the song. Awesome, right? Download it here and check out a great write up on Magnet Magazine […]

The Prids are an amazing band and I’m so excited for their new record. They also put on one of the best live shows I’ve ever seen.