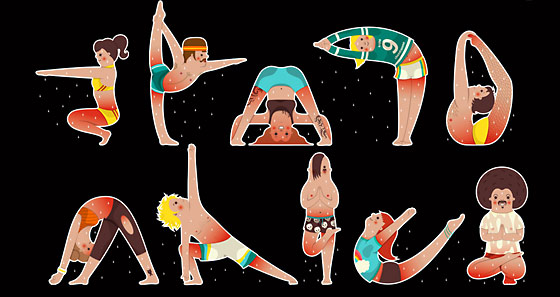 Roberts: I went into yoga to get strong in the body and in the process found my head had to catch up. Unlike simple exercise, yoga postures are linked metaphorically to the quality of one’s experience. Whether one buys this notion is another question altogether. Some poses physically open the heart, making for both a nice broad chest and encouraging a capacity for both receptivity and kindness to one’s self. Then there are hip openers. The pelvis is a place in our body that tends to hold anger; hip openers help process this anger. The pelvis is also about creativity—think of the womb—and thus hip openers can lend one access to one’s own creativity. Forward bends are equated with past experience, and in yoga, we amplify our capacity to helpfully excavate that past. Back bends, on the other hand, are metaphorically about the future and help to cultivate a sense of being unafraid to welcome the unknown and valuing what choices life has presented and will continue to present, until the last moment of life. I have always been uneasy with people who are spiritually minded. I regard a great deal of new-age notions as fluff. I think that there is a great deal of naiveté in all movements spiritual. And yet I have found in the case of yoga that the claims yoga makes do in fact spin out of one’s body with practice. If these claims sounds dubious, all I can say is, “Try it and find out.” I still find it difficult to fathom myself.

One reply on “From The Desk Of Crash Test Dummies’ Brad Roberts: Yoga”