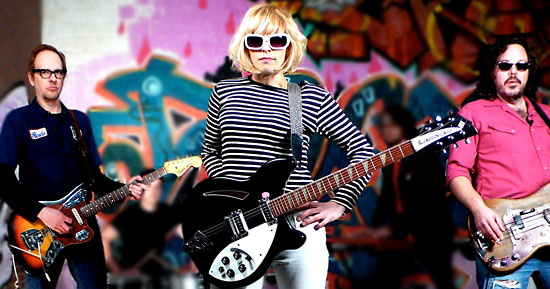 The members of Bettie Serveert are alt-rock survivors. They have been performing in various incarnations since 1986, and they released critically acclaimed debut album Palomine in 1992. Joining the core lineup of vocalist/guitarist Carol van Dyk, guitarist Peter Visser and bassist Herman Bunskoeke on new album Pharmacy Of Love (Second Motion) is drummer Joppe Molenaar (of fellow Dutch band Voicst). The group recorded the LP in relative isolation in Waimes, Belgium, in order to better concentrate on honing its sound, and the result is a mix of the classic Bettie Serveert vibe with new modern-rock flourishes. MAGNET discussed the particulars with van Dyk. Bettie Serveert will be guest editing magnetmagazine.com all week.

MAGNET: Bettie Serveert was poised to make it big in North America in the alternative-rock era of the mid-’90s, but never quite broke through. To what do you attribute this?
Van Dyk: Back then, we were terribly naïve. Well, maybe it was a lack of hits, stubbornness, franticness and stress around the endless touring after Palomine. We started out having no plan at all, except maybe play a couple of gigs. Imagine our surprise when people started buying our album. On the other hand, we know a lot of bands that did break through after their first successful album and then split up after their second. And we’re still here!

How was the recording experience for Pharmacy Of Love? You were quite isolated in Waimes, Belgium.
The recording was great! Isolation makes for a great bonding. We were prepared and knew the songs well. It was basically a holiday camp with the joy of playing. We recorded most of the album in four days. There was a house that came with the studio, so every night we would have home-cooked meals made by Herman, who happens to be a great chef.

Pharmacy Of Love is your first album in four years. How does it feel to release something new after a few years off?
Well, we did two tours in the U.S. after the last record. Then, three theater tours in the Netherlands and some shows in Belgium, Germany and Spain. We also recorded an entire album late 2007 that we shelved. So it didn’t really feel like a layoff.

The new album has a slightly more modern, dance-punkish sound. Have you found yourself influenced by new bands of the past decade?
There are a lot of influences on this album, from old and new bands, like Blood Red Shoes, Yeah Yeah Yeahs, Ramones, Dinosaur Jr, a Dutch band called Moss (we covered their song “Previously Unreleased” and re-named it “Mossie”), Broken Social Scene, Brain Eno, Sonic Youth, to name a few.

Bettie Serveert has gone through several lineup changes. Now, for the new album, you added drummer Joppe Molenaar. Is it difficult, creatively, to gain and lose band members with frequency?
Sometimes it is hard when someone leaves for whatever reason. Friendships may be bruised. Creatively, it can be good as well. You will get new approaches, and you can try different stuff. And it keeps you fresh and alert. We already knew Joppe, because his band Voicst supported us on their first Dutch tour a couple years ago. He’s great to work with; some people have compared him with drummers like Dave Grohl or Keith Moon. He’s coming with us on tour in the U.S. and Canada.

You have recorded many covers, such as the Velvet Underground’s “Venus In Furs,” Bright Eyes’ “Lover I Don’t Have To Love” and Bob Dylan’s “I’ll Keep It With Mine.” Do you enjoy reinterpreting other musicians’ songs?
Every once and a while, it can recharge your musical battery, especially when you’re stuck with your own songs. But most important, the lyrics/songs have to appeal to my heart. It can be fun to look at a song and say, “Let’s try a different approach.” We later heard that Sebadoh and Bright Eyes did “our” version of their song when they played it live.

Last year, you and Peter did a project called Me & Stupid with members of You Am I and the Gin Club. Did you feel inspired to just do something different? Are the songs from that recording session going to get a wide release?
Peter and I had this idea to let go of the usual verse/chorus/verse/middle-eight/solo/chorus/end ritual of the pop song and make a collage of parts of songs and glue them together. We wanted to try and have a more natural flow in the music itself. Russell (Hopkinson) and Matt (Wicks) totally understood the music, and within two days we had most of the CD done. Andrew (Morris) and Ben (Salter) also came up with songs, and we wrote some new stuff on the spot. Great time, especially on the beach. The plan is to have it released later this year as a free download and also as a physical CD. Not sure yet in which countries it will be released, but we’ve been playing one of the songs at our live shows with the Betties.

What’s it like being a female-fronted indie-rock band? Did you have many female rock idols growing up?
Mostly when we play at a festival, I’m the only female singer who also plays guitar. Female indie-rock singers/guitar players are still a minority, most certainly here in the Netherlands. But the boys in the band are really nice to me; they’re like my brothers, so to speak. My female rock idols include Debbie Harry, Kim Gordon, Kim Deal and Joan Jett.

Both your sound and music style are so eclectic. People wouldn’t immediately associate your sound with the Netherlands. How does being Dutch affect your identity as an artist?
Being Dutch in the international music scene means that we more or less operate in quarantine. So we can allow or block any influence at any time. Also being our own record company means we can do what we want! Not sure there is such a thing as Dutch pop music. Most Dutch pop music has its roots in the American and/or English music scene. On the other hand, I’m Canadian, and English is my first language. It might be one of the reasons why some people don’t see us as typical Dutch.

I noticed you’re not touring in America behind your new album. What were your impressions of American fans when you toured in the U.S>?
There is a North American tour in the making. The plan is to start touring on September 23 until the end of October, that is, if we get a work permit. American people can at times be very emotional, as they focus on the lyrics way more than the Dutch, which is understandable. And they are also more vocal and respond more to comments we make onstage. They sing along when they know the song. Yep, we like the American audience.

thanks for featuring one of the best singer-songwriters and best bands in the world: carol van dyck and bettie serveert!

Saw them in SF on last time through and they confirmed yet again that the Betties are music gods for me. I just wish Carol had signed my breasts….maybe next time, as they will be bigger.:)
WP, Oakland CA.