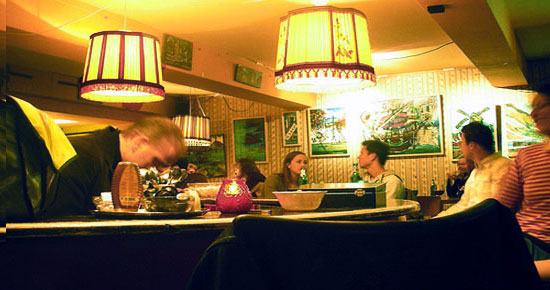 Peter: De Nieuwe Anita is a bar/venue owned and run by Jeroen and Olga. Jeroen was one of our former drummers. First of all, it’s the coolest place in Amsterdam to hang out. They have about four or five special nights every week, where bands play, movies are shown, there are poetry readings, art expos, knitting nights (yes!), you can have you hair cut, chill, drink wine and beer and cocktails on the weekends. Every Tuesday, there are bands or singer/songwriters playing behind the bar. Carol and I did that a couple of times. We got real nervous, knowing that half of the people in bands in Amsterdam were watching. Jeroen is on the drum box in the videos below.