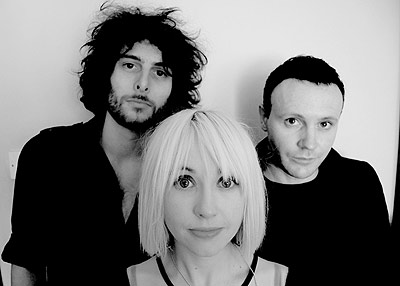 Self-described as creating “a new loud/quiet dynamic for a new decade,” the Joy Formidable is a Welsh three-piece that gives big guitar rock the dignity it lost in the early 2000s when Creed and Nickelback set a new, um, precedent for the genre. The band was formed by former schoolmates Ritzy Bryan (guitar, vocals) and Rhydian Dafydd (bass), and the members’ individual growth as songwriters spanned oceans and continents before the three of them began creating in a London live-work space. It was in this multi-use cradle of earned optimism that the Joy Formidable wrote and recorded A Balloon Called Moaning, on which boisterous rock/pop gem “Whirring” resides. A Balloon Called Moaning just hit record shelves and is the debut release from Black Bell Records, which is owned by Passion Pit’s Ayad Al Adhamy.