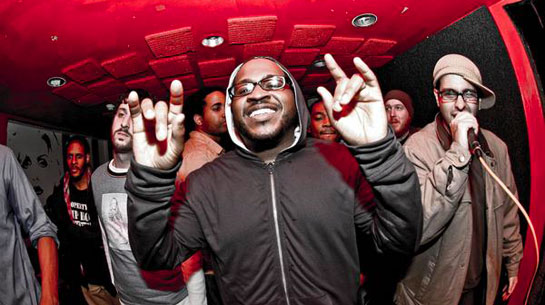 In cities across America, First Friday is synonymous with art galleries opening their doors, providing free booze and hosting parties where people can check out an eclectic mix of art they’d otherwise have to pay to see. Philadelphia is no exception, with Old City always drawing a huge crowd for the monthly art fest. But some would argue that the real First Friday event in Philly was always Hip Hop Lives. The show was the brainchild of one of the most talented rappers and overlooked entertainers Philly has ever known: Mighty Flipside, Esq. of hip hop group Electric City. The party got started in 1998, and over the next 11 years, it developed into the greatest monthly event in the history of Philly hip hop.

It all started at a one-off house party featuring some impromptu performances by some of Philly’s best underground hip-hop groups, including Electric City, Jedi Mind Tricks and Outerspace. Flip realized the party was something special and unique and that it needed to continue and become something bigger than a house party. He coined Hip Hop Lives that night. “I called it that just to be a little dramatic, a little existential,” he says. “Like hip hop was dead already with Puffy and all this watered-down shit coming out on the radio.”

In 1999, Flip took the party to its first public space: the basement of coffee shop La Tazza. Soon, lots of people were showing up from all walks of life. “I never got it that the network of musicians I had tapped into weren’t just great to perform with, but that people came just because there was a live band,” he says. “The idea that people would come to check out a band they never heard of. I had a new appreciation for that.” The freestyle set was always the climax of the night, incorporating everyone who had performed as well as the crowd. “The freestyling at the end of the show, that was a well-thought out idea,” he says. “That is the communal, interactive aspect of hip hop. You know that ‘put your hands up, somebody say ho.’ You feel like you’re a part of the performance. That made people wanna come back.”

They came back again and again—and brought their friends. Hip Hop Lives started to draw huge crowds and generate buzz across music scenes and in the press. Flip’s legendary skills as an entertainer, rapper and ultimate party emcee were becoming more and more sharpened. “I learned those showmanship skills from years working in jazz and blues clubs,” he says. “I would study how people used their hands and body and movement to enhance their presence. But it’s two different disciplines being a host and being a rapper. Two different beasts, and it’s not easy to juggle.” Soon, revered emcees like Doodlebug (Digable Planets), Greg Nice (Nice And Smooth) and The Last Emperor were performing in the featured guest slot, and people like Sen Dog (Cypress Hill) and Questlove (Roots) were stopping through to check in on the party everyone was talking about.

By 2001, Hip Hop Lives needed a larger venue, and Rick D. (owner of Tritone) convinced Flip to move the party to his club on South Street. Electric City was also getting a lot more respect and attention. Flip and DJ Skipmode were sharing the stage with icons like Kool Keith, the Beatnuts and Rah Digga. And Flip made sure to never lose an opportunity to build Hip Hop Lives. And as if the awesome show wasn’t enough, Hip Hop Lives was developing an unambiguous reputation as a great place to meet people and make a friend for an evening—or longer. “We’re responsible for two weddings, three kids and countless late night hookups,” he says. After several years at Tritone, Flip found himself running of the most successful recurrent parties in Philly. Then, in 2006, Rick D. died suddenly. One of the party’s staunchest supporters was gone, but Hip Hop Lives went on.

After Rick passed, the show moved to legendary Philly venue the Five Spot. Being in Old City on First Friday was an opportunity that Flip immediately made the most of. “Because it was First Friday in Old City with all the art galleries opening up and having these free parties,” he says, “I really went out of my way to make sure we got some digital artists, photographers and other artists involved in the show.” Hip Hop Lives had turned into a full multimedia experience. “It was crazy. We had puppeteers, people doing live paintings along to the music, all kinds of visual art happening.” The party had moved to a whole new level, and a whole new audience was hearing about it. “The reaction at the Five Spot was uproarious. We started having to turn people away at the door because of fire code.” It had gotten so successful that Flip had a staff working for him to help put together and run the show. And lots of people were benefitting. One night, a local artist had a bust she sculpted of Nina Simone’s face on display. A man came in and bought it for $5,000. It turned out he worked for Simone’s daughter (the singer Simone), and the artist soon found herself trekking around Europe with Simone as the tour’s official artist. The possibilities seemed to be limitless for everyone involved. Then, one night after another mindblowing show, Flip left the Five Spot and received a text message in the middle of the night that the venue was burning down. “We were literally the last show that happened at the Five Spot,” he says. “We were about to leave all our equipment there that night and some expensive art and pick it up the next day.” Luckily, they didn’t.

After a second tragedy that caused the party to move, Hip Hop Lives was never the same. The show moved to the Pontiac Grille, Café Abana, The M Room and, finally, the Fire. The last Hip Hop Lives was June 5, 2009.

Flip is constantly reminded of what Hip Hop Lives meant to Philly. “I run into people almost every day,” he says, “all different kinds of people, who are like, ‘Please resurrect Hip Hop Lives.’” The constant accolades mean a lot, but what makes him happiest is the marriages, the friendships and the musical unions that came out of the party. “I realize now that it became a part of people’s fabric. I just wanted to make your life better for a night, and that’s what I think it was for people.”

For Flip, Hip Hop Lives was an education in becoming a consummate rapper, entertainer and project manager. “Everything that I have, all the props, all the respect—and respect goes a long way in Philly—I got that because of Hip Hop Lives,” he says. “My skill set to organize situations, to be a boss, to handle making tough decisions, I learned from Hip Hop Lives.”

Nowadays, Flip is running Hip Hop Lives Now, a program that teaches inner-city youth the often overlooked skills necessary to take a serious shot at a successful career in music. He teaches everything from development of freestyling and writing skills to making and producing beats to the business and logistical skills that so many independent musicians lack. “I teach them everything that Hip Hop Lives has taught me, from design to emceeing to budgeting,” he says. “So, you get all these skills and have a base to start from.” Flip is now in the studio with his current crop of kids, working on a Hip Hop Lives Now release. “I wanna extend it to an audience of young kids who never got to experience Hip Hop Lives and build up their skills and confidence,” he says.

The extra downtime from Hip Hop Lives has also given Electric City a chance to work on a lot more material. Its last record, Everything, Everywhere, All The Time, was a stellar set featuring razor-sharp rhymes, sophisticated beats and mind-bending sampling and scratching courtesy of DJ Skipmode—and electrifying cameo performances by some of Philly’s best emcees. It was a testament to true and classic hip hop, just like Hip Hop Lives. Electric City’s new record, King Friday, is being released this summer. Flip is excited about the future of his group. “Hip Hop Lives has been over less than a year, and we’ve got a new record out. I wasn’t fucking around. We ain’t slowing down.”

[…] Every couple of weeks, Rocco tells us about a Philly band that shoulda been bigger than Broad Street. [READ MORE] […]