There will always be a small bunch who will never forgive Justin Currie for the sins of his former band, Del Amitri. Namely, the speed and vigor with which the group abandoned the angular new-wave-ish promise of its 1985 self-titled debut for more conventional pop inroads. Currie makes no apologies for the 17 years and five albums of smart, well-executed, comparatively middle-of-the-road Brit Invasion melodies and country-rock yearnings that followed. It even netted him and his Scottish bandmates an American hit, “Roll To Me,” in 1995. Nowadays, Currie is still living in Glasgow while nurturing an intermittent solo career that now includes The Great War (Ryko). Coming eight years after Del Amitri’s last album, it resurrects the reassuring jangle of that band as it continues Currie’s middle-age explorations of the darker recesses of the male love muscle (i.e. the heart). Currie will be guest editing magnetmagazine.com all week. Read our Q&A with him. 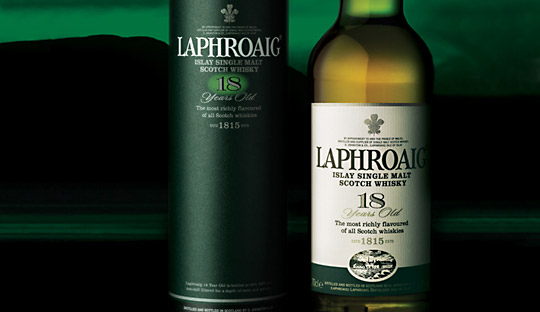 Currie: I don’t like whisky. I don’t like it at all. It is one pool into which you never want to fall. The fumes of it bring unwelcome thoughts of the Christmas uncles and weary fathers of our youths. The Beatles had to mix it with American cola to make it palatable. The names of those low-rent blendeds are enough: Teachers, Grouse, Whyte and MacKay. And all that fucking snobbery that goes with single malts—their provenance, the age, the casks and the bloody water. Laphroaig is not whisky in any of that sense. It is a dark, dangerous world into which brave boys descend on winter nights. It is the encircling music of sweet hell. It is the ruin and the reverie of every musician on the razz. It’s the place to go after all the shops are shut and the wind is wearing down the walls.

I don’t know why he’s hating on single malts in general (why let somebody else’s snobbery ruin a beautiful thing for you?), but Laphroaig is definitely my favorite of the lot.

Expect better from Justin than a “I hate the snobs and the cheap stuff” view which is a snob-like attitude itself then compounded by “except for this one of course!” which has just as many whisky things written about it as the others- indeed he goes to be as pretentious as any OTT whisky writer has ever been with “It is a dark, dangerous world into which brave boys descend on winter nights. It is the encircling music of sweet hell. It is the ruin and the reverie of every musician on the razz. It’s the place to go after all the shops are shut and the wind is wearing down the walls.”.

If teenage-level rants are the level of his writing now, that’s a shame. Double shame actually as I had the album down as one to buy from but if this is the level of writing, I’ll pass thanks.

Shame, Justin used to come across as intelligent.

(And as Dan says, why let someone else’s point of view bother you?)