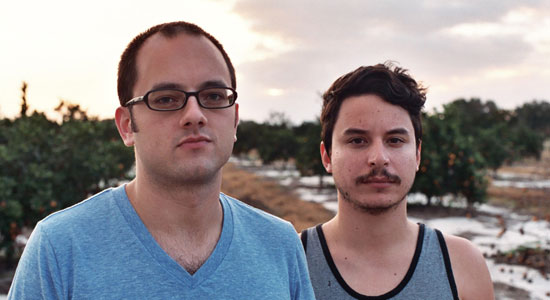 The word “Viernes” means “Friday” in Spanish. Viernes is also the name of a band comprised of Winter Park, Fla., natives Alberto Hernandez and Sean Moore, named for the particular day of the week when they’d get together with hand-me-down instruments and create dreamy, sprawling sonic landscapes. The two started making music together after discovering a mutual love for certain artists, many of which show up on this mix tape the guys made for MAGNET. The debut album from the duo, Sinister Devices, was released last week through Kanine Records.

Hellebore “Introduction Végétarienne”
Sean: One of the most fascinating groups of the rock-in-opposition movement. This cut works a slow crawl toward an astounding whole-tone scale-guitar motif. Their sole record, Il Y A Des Jours, is essential listening of the highest order! Video

Milton Nascimento “Clube Da Esquina No 2”
Alberto: Just a beautiful song. This appears on Clube Da Esquina, the first album of a Brazilian music collective bearing the same name, which was mostly a collaboration between Milton Nascimento and Lo Borges. I could listen to this song over and over. I love the way the smooth vocals lock in with the guitar melody. Video

My Bloody Valentine “To Here Knows When”
Alberto: One of my favorite songs ever from probably my favorite record ever, Loveless. So sexy. This is the song that plays in your head when you are looking at the face of a beautiful girl you completely adore. Video

Serge Gainsbourg “Je Suis Venu Te Dire Que Je M’en Vais”
Sean: From the triangle to the acoustic guitar, this arrangement is just spot on. The song represents an exquisite take on a love gone wrong. There is an unhealthy amount of conviction in Gainsbourg’s vocal delivery. Touching and moving, this piece often gives me respite, in spite of the subject matter. Video

Here We Go Magic “Tunnelvision”
Alberto: One of my favorite songs to come out in the last few years. It never seems to get old to me. Here We Go Magic recently came through Florida on tour, and I put them up for the night at my house. We stayed up all night drinking, playing each other music. They were such wonderful people that it only made me love them more! Their new record, Pigeons, is really good. Video

Bobak, Jons, Malone “On a Meadow Lea”
Alberto: First discovered this rare 1970 gem on one of Bradford Cox’s micromixes. He posts the best mixes on his blog! When Viernes opened for Deerhunter last year, I asked Brad afterward where he discovered this song. He told me Tim from Stereolab turned him on to it while they were on tour together. Motherlight is a great album not too many people know about. Video

Harmonia 76 With Brian Eno “Vamos Companeros”
Sean: The addition of Brian Eno brought revitalized atmospherics to Harmonia. The percussive loop that drives the piece is absolutely infectious! “Vamos Companeros” features a nervously soaring feedback melody that is nothing less than beautiful. Video

Thomas Wayne “Tragedy”
Alberto: This one I rediscovered on another micromix. My father used to play me Thomas Wayne and Lee Hazlewood when I was a kid, so when I first heard it again years later, it felt so familiar. Like being reunited with a long-lost cousin. But this one pulls the heart strings, and it’s a good one when you aren’t having the best day. I listened to this song a lot on my way down to Puerto Rico recently. I was with my grandfather in his final days battling cancer. It somehow helped me deal with his passing. Video

One reply on “Viernes Makes MAGNET A Mix Tape”