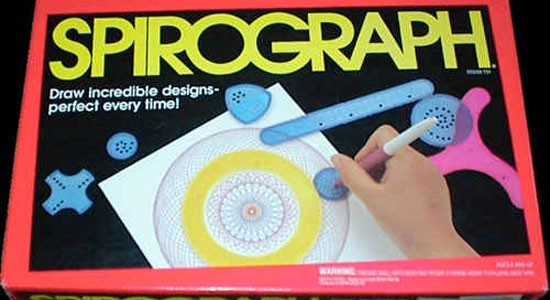 Kulash: The Spirograph might be the best toy ever, but it’s really hard to find a good one now. Hasbro owns the name but no longer sells the sturdy, robust sets I knew as a kid. Other companies sell slightly higher quality knock-offs for those not as susceptible to nostalgia as I am, or you can just shell out the $40 or $50 for an old one on eBay. Which is what I recently did, because I have that problem where once I start browsing for something online, my hunter/gatherer instincts kick in and I cannot stop myself from sifting through page upon page of listings until I corner the most riveting find and triumphantly electronically best it, even when I really, really don’t need it. Like for instance a Spirograph set from 1967. Anyway, if you were cursed with a childhood ungraced by the Spirograph, it’s basically a bunch of plastic gears with pen-holding holes in them. As you slide the gears around each other on a piece of paper, you get crazily cool geometric patterns.

12 replies on “From The Desk Of OK Go’s Damian Kulash: Spirographs”

Ah! This was my favorite possession, after my portable suitcase-turntable, for at least 3 years straight. More than the Lite Brite, better than the EtchASketch, this even bested my Easy-Bake Oven and my handmade, engraved, “clacker” (which I now know is called a Jacob’s Ladder)! My mom said once that the Spirograph was the best yard-sale purchase she ever made for me, because it was quieter than the turntable and Sgt Pepper’s on repeat.

Damn it, Damian, you have engaged Nostalgia. Are you happy, now?

For me, the drawback to Spirograph was that I couldn’t keep track of the pieces and eventually lost everything.
I think it’s because what I REALLY wanted was “Fashion Plates”
Why, mom…why?
http://cgi.ebay.com/Vintage-Tomy-1970s-Fashion-Plates-Designer-Play-Set-/230490586123?cmd=ViewItem&pt=LH_DefaultDomain_0&hash=item35aa4f3c0b#ht_5882wt_913

What’s good for the hunter/gatherer ocd instinct is metal detecting, artifact hunting but best of all storage clean outs. You can get some dope antiques cleaning out foreclosed storage units. Really unique and rare stuff that is even hard to find on Ebay, My bests from units were a Flintlock Musket, a very very early aeronautical division holster, and an Arthur Elliot “Space Aged” chess board from the 50’s (rare) … abandoned/foreclosed storage units beat ebay any day but you kinda have to have like real hunter instinct for that cuz it’s very dirty business.

The Arthur Elliot was friggen awesome! I only have an eye for good stuff 😉

The one I found was the rarest Anri Space Age set…kinda close to this
http://www.worthpoint.com/worthopedia/rare-space-age-anri-chess-set-arthur-elliott

chess pieces and their names, “Stazione Spaziale, Nave Spaziale, Satellite, Missile, Radar, and Razzo” …….friggen awesomeness! It’s hard to find good stuff on ebay… I go for the units for the artwork and other rare collectibles that aren’t as easy to find on Feebay and aren’t over sold @ flea markets like the rest of the junk……more rare cool vintage stuff to be found. An original etching of a duck stamp print in a unit too, I sold it for $1000 but that one was a pretty cool find. i have a good eye….

actually this is the exact Anri I found:
http://aqua-velvet.com/blog/images/09_june/24_chess_set3.jpg

the holster I found was hand signed (initials + last) , and based on the holster style being so early in aviation history, i was able to pulled the orig. owner and matched the sign against the draft card, it took a long time & a lot of research but OCD-ily i tracked down the original owner based on his handwriting against his draft card, it was a famous black & white architectural photographer’s that took early aerial photos of NYC and while in the military he took black and white aerials during early aviation. that one was my biggest finds. most of his black and white photos sold through Christie’s auction house. A R. Buckminster Fuller photo from the Isamu Noguchi museum featured here: http://www.noguchi.org/images/fuller1.jpg

you can’t put lazer beams and colorful crazy shit in your vids and not catch my attention. lol

That is one of his black and white photographs, the others were early aviation, Fuller was an architect and the inventor the dymaxion car (seen here:
http://strawdogs.files.wordpress.com/2010/01/dymaxion-car-2.jpg)
, he was friends with the architect whose holster I found. The earliest times of aviation and the holster was from early the earliest aeronautical…so basically the two don’t go together quite well (photography lovers love photography and military collectors collect military)….for having a sale market interest per say… (selling the item as collectible to his black and white photography).. ..I forget what the range is for the auction sales but I think it’s about 50K and up, per black and white photo he took…. the holster a weird collectible but he had it on him while taking some of the most famous black & white aerial photos in history. kinda friggen cool. i love ocd hunter/gathering auctions/etc.

Kind of equivalent to your OCD 6000 piece lego building.

That’s how I got my nickname after Rube Goldberg so when I saw the Rube Goldberg I zero’ed in, among other reasons. Oh and cause your dogs name was Ella too, I had an Ella, and I saw how manic you were, not that any of it really amounts to anything but those were some of the commonalities that freaked me out about you. But I could just be totally psycho, I only OCD’d cuz anxiety kicked in, and that’s obsessive love whatever not healthy but I was like yeah um a dog isn’t a reason to stay together.

You and I are a ying yang, now the Boy feels the same way you do. 🙂 Look at our posts around the internet it’s friggen weird. No one’s gonna love ya if ya can’t let…

Does Damian know about the Assassination attempt on a political leader over the freedom of the net issue, cause a lotta BIG friggen stuff is stirred up. apparently it opened up a can of worms from the past. a lotta worms. l