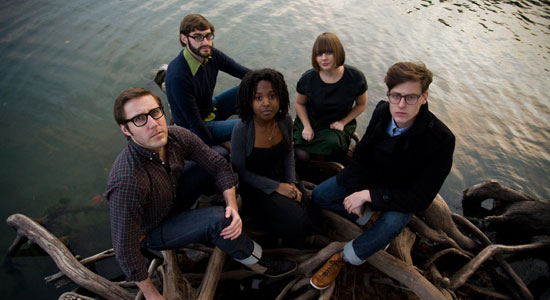 While discussing his collaboration with famous 21st-century modern composer Philip Glass on the 1982 film Koyaanisqatsi, director Godfrey Reggio invoked Sergei Eisenstein, stating, “One should be able to see the music and hear the image.” In perhaps no musical act is this adage currently more resonant than Balmorhea, a classically influenced troupe of Texas musicians who create musical vignettes so penetrating that we music writers can’t help but abuse literary devices to depict the band’s pastoral sound for our readers. To some extent, this is rational (they’re contracted regularly to compose for film and TV) and relevant (2009’s All Is Wild, All Is Silent is loosely a concept record based on the very illustrative and emotional experience that Texas frontiersman William B. Dewees went through when he discovered the Lone Star State). But where much of the music that’s written for film only dispenses its desired affect within a moving-picture context, Balmorhea’s work goes a great step further, operating on that cherished emotive plane where the absence of words is a mere afterthought in the face of such accomplished, honest composition. Sit in a quiet room with All Is Wild or the band’s latest, Constellations (Western Vinyl), percolating the air around, and you might catch a glimpse of how baroque-period society types must’ve felt in the presence of the latest Bach or Handel piece. Though Balmorhea would be the first to assuage my comparison to these iconic composers—I don’t know anyone, musician or not, who would willingly invite that kind of pressure—it’s worth painting the metaphor to drive home this point: Rarely do bands create as deliberately and with humility as when Rob Lowe, Michael Muller, Travis Chapman, Aisha Burns and Nicole Kern pick up their instruments and quietly escape the hurried world around them.

Balmorhea recently returned from a month-long trip through mainland Europe and the U.K., a tour that provided the band with some of its most memorable experiences to date. Fortunately for us, the band members were kind enough to jot down their impressions and share a few photos of the journey with MAGNET, in addition to letting us pick their brain about the tour, their hectic writing schedules and the impact of the web on instrumental music.

MAGNET: The band toured Europe for the third time in two years, this last time alongside noted German pianist and composer Nils Frahm. Do you find that European audiences are any more or less attracted to Balmorhea’s music and overall aesthetic than those in the U.S.?
Muller: The European audience is generally attending our concerts under a cultural pretense rather than a social one. Moreover, the venues are set up as listening rooms in contrast to a bar-based venue. There just aren’t as many venues in the U.S. that are solely sanctioned as strictly music-based concert spaces. We have learned to adapt and make the most out of either situation, morphing our set as a result of the room or crowd demographic. So we are OK with either, though we have preference to the quieter environs.

Almost as soon as you returned from a lengthy jaunt overseas, you headed to the West Coast with the Japanese experimental band Mono. How was the idea hatched to spend some time on the road together?
We were asked to support the Austin show for Mono by their agent, and I thought it strange they weren’t touring with support for the entire tour. Upon inquiring, it came to pass that the band originally slated to fill this spot couldn’t do the first leg of the tour. Balmorhea was submitted to Mono and their management and they invited us for the first week. We actually just returned a day ago, and it was indeed a nice fit and there are some similar listeners, but it seemed advantageous for both parties in playing for a decent-sized sliver of a new audience.

Thanks to Balmorhea’s Tumblr feed, fans are regularly given a visual glance into the band’s travels, including “secret” shows in Germany, for instance. Are there any moments that stand out the most from your most recent trips to Europe or the West Coast?
That secret show in Germany was by far a stand-out of any tour we’ve done yet. But overall, any time we come to a city we’ve never played in and find the room full of people waiting for our music, it is a truly wonderful moment. Each night is different in terms of the surroundings and the culture, so touring in this theme of “constant adventure” is a welcomed and exciting embrace.

Between touring, scoring films and releasing two critically-acclaimed full-lengths, the last two years have been very busy for Balmorhea. What keeps you creatively inspired given your hectic schedules?
In the past year or so, it somehow felt empty or strange to not be working on something. All of those projects fell totally and organically together and fit in the days and months perfectly. The music that was produced seemed to come forth without too much effort. We realize this may not always be the case, so we let it happen as it did and have been blessed for doing so.

In addition to writing a prolific amount of original music in a short amount of time, Balmorhea worked with some of the biggest names in modern classical and ambient genres on the All Is Wild, All Is Silent remixes album in 2009, which is a fairly novel concept in the instrumental genre. Artists such as Eluvium, Peter Broderick, Rafael Anton Irisarri, Machinefabriek and Helios reworked the record’s tracks in very diverse ways. Did you have relationships with the artists before concepting the album? What criteria, if any, did the band use to discern which artists should be included?
I agree that these artists’ names next to one another on the LP sleeve still baffles me. And knowing they are there because they all re-worked our own music is simply flummoxing. We did know all of the artists personally in some capacity or another. Some we had played and even toured with and others merely friends via email and music swaps. We didn’t really use any filter or gauge to choose them, other than just emailing all our friends that happened to be making amazing music. To our amusement, all but a couple said yes with no hesitation. It is a very special collection in our minds, and we treasure it as such.

In previous interviews with the band, it’s been said that Rob and you came from two pretty different points-of-reference musically, eventually bonding over classical and experimental records after college. Does that stark taste dynamic from your upbringings still exist or are you two more consistently attracted to the same types of music these days?
We still have some overlap, but the predominant listened-to music on our own is a little different. Rob, I believe, listens more to country, rock and Americana, whereas I listen to more ambient and experimental music on any given day. The crossover between those is where, I suppose, our subconscious inspiration is birthed out of for our own music.

Given how the process of discovering new music (viz. blogs, digital retailers, social media and file-sharing sites) has evolved in our digitally obsessed culture, do you find that people are any more or less open to instrumental music than when you initially started Balmorhea?
There are certainly more instrumental acts in comparison to when we began, and we’ve also seen the drastic rise in popularity in predominantly instrumental music in such acts as Mogwai, Explosions In The Sky, etc., on a national and, ultimately, global level. So yes, I think the general public that might not have been immediately driven to these types of genres is more open and has easier access to listen, perhaps almost solely by the myriad of social media and web-based technology delivering music to them.

Despite how busy you’ve been recently, your website indicates there are still many irons in the fire. What’s next for Balmorhea?
We have a few new tunes in the works we are excited about fleshing out in the studio as well as a couple original music compositions for some TV and films. We will take a break from live performances until the fall, when we will do a headlining U.S. tour in September with stops for Raleigh’s Hopscotch Festival as well as a couple other one-offs before heading to Europe again in late October.