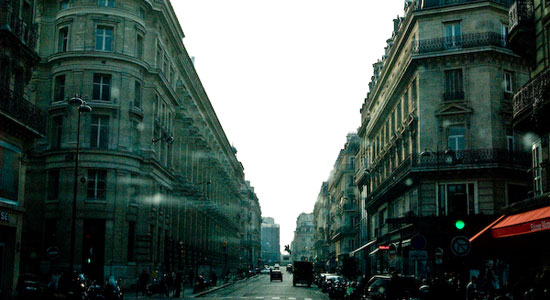 Paris, France, April 14
The U.K.: a rough week (save Edinburgh) of long drives, traffic, road closings and ferries. We were happy to be back in mainland Europe via the tunnel for two nights in Paris. As a godsend, the promoter’s friend Marco put us up in his loft in the 19th arrondissement for both of our nights in the city. Marco’s flat was brimming with musical instruments from around the world as well as a well-stocked music collection of CDs and LPs.

Night one we played a normal gig in small room just around the corner from Marco’s called Espace B. Between Nils having come down with a cold and the non-existent parking for our long van, nerves were a bit thin upon load-in. The show ended up sounding great and was even filmed and photographed by a friend of ours who we’ve worked with in the past. However, it was strangely the smallest crowd of the entire tour.

After a 30-minute walk back from the odd parking spot we found, we retired for what would end up being a full 12 hours of sleep. Internet catch-up, laundry, many croissants, fromage and percolated coffee filled the day in Paris very quickly before our strenuous parking search in the city center. Sitting through dozens of light changes at each intersection, we easily spent a good hour-and-a-half in the distance of approximately two miles. After being told the Louvre had high clearance, we realized the 80 Euro per hour wasn’t worth it. After reversing out of the enormous garage and braving the rush hour again, a light from heaven shown down on a loading spot that opened up. It was right in front of the building where we were to play and film for a La Blogotheque program called Soirées De Poche in the 3rd arrondissement.

The performance space was a narrow setting in the lobby of an artistic office space, which was jam-packed with art books and fashion periodicals. After setting up and getting all the levels and camera crew settled, we popped into a lovely little bistro on the corner for a nice mix of salads, cheeses, meats and wines by sight of candlelight upon the smoothed wooden tables. The waitstaff looked like they were in a photo shoot as did the patrons lounging with their perfect hair.

In just a short time, we returned to the performance space to find it crammed with nicely dressed folks waiting to enter. Nils played a short set before we went on for two sets bridged by an intermission. After an energetic encore, we finished the night embracing our new Blogotheque friends and made our way back to the 19th via the now-empty Parisian avenues.

An early rise found us trudging through two hours of morning rush-hour traffic to start what would end up being a nine-hour journey to the heart of Switzerland, where we would spend four days to about our first day off, one that we all were anxious to reach.