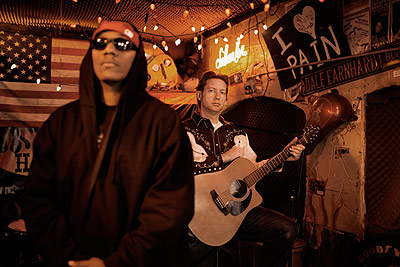 In the world of genre mashups, few artists have successfully bridged the gap between country and hip hop. Brooklyn producer Rench has shifted gears for new project Gangstagrass, adding urban beats and rapping to bluegrass backdrops. He achieved notoriety for “Long Hard Times To Come,” the theme song for FX drama Justified. New track “I Go Hard” features T.O.N.E-z spitting boastful rhymes over twangy banjo licks and fiddle runs. The juxtaposition works better than you might expect. Their first album is commercially unavailable, but Rench and his backing band released a 10-track LP, Lightning On The Strings, Thunder On The Mic (Rench Audio), in May. Fans of Everlast and Bubba Sparxxx shouldn’t sleep on this countrified crew.

50 years old and always young when it comes to music. love this blended genre. these guys are great. will share with my teenage kids.