For more than a decade, the Pernice Brothers have mostly made plush, romantic orchestral pop that doesn’t gild the lily once tended by the Zombies, Walker Brothers and Elvis Costello. True to frontman Joe Pernice’s working-class nature, the band’s sixth and latest album, Goodbye, Killer (Ashmont), does away with the sighing string section and goes straight for the guitars, from the mod-rock riffing of “Jacqueline Susann” to the Teenage Fanclub power-pop of “Something For You.” After a four-year spell between albums, the Pernice Brothers return with their leanest and most efficient effort to date. Pernice will be guest editing magnetmagazine.com all week. Read our brand new Q&A with him. 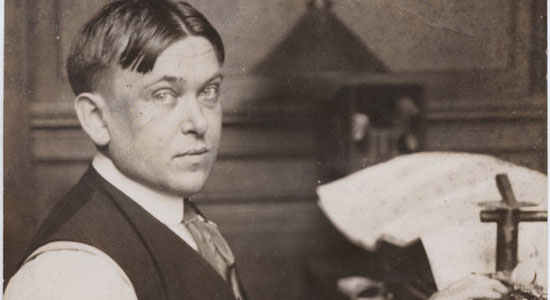 Pernice: H.L. Mencken said that genius is the ability to prolong one’s childhood. If Mencken was correct about the genius/prolonged-childhood thing, then I proclaim myself an extremely smart individual. As I enter my fifth decade on Earth, am I ashamed to admit my passion for restoring and riding 1970s-1980s BMX racing bikes? Not any more than I’d be if I spent the better part of my free time trying to whack a small dimpled white ball into a hole in the ground. Grey Goose on ice tastes good after taking a 1981 GT 26-inch cruiser out for a bash, you know. Good luck trying to find one though—the GT, not the Grey Goose. You can at least see one and countless other bike-porn stars with names like Redline, Mongoose, GT, Hutch, Torker, Kuwahara, etc., here. Go to the “bikes” section and enjoy. If you think that’s silly, you should watch curling. Now those guys are super geniuses.

3 replies on “From The Desk Of Joe Pernice: H.L. Mencken”

I like that “H.L. Mencken said that genius is the ability to prolong one’s childhood.”
It is true, society couldn’t withstand a ton of original thinkers walking around, sheep required for organized governments.

I remember as an 11-year-old, circa 1982, thinking the older brother of my best friend was an absolute God when he got a Redline bike. “Feel how light it is, man. Go on, pick it up. See how light it is?” I never got one of those, but just being able to ride around on his for part of one weekend during a multi-family camping outing made me feel like I would be a tremendous ladies’ man one day. As a scrawny little kid with glasses, nothing could have been cooler–until some cute girls started hanging around us by the campfire. That was cooler. (It was the Redline. I know that now.)

I recently scored a couple of ’60s/’70s Schwinns for me and my wife (Hollywood for her, Speedster for me) at a local thrift store. I know they’re not as cool as the BMX racing bikes of yore, but they’re still pretty bad-ass, and they’ll have to do…

Joe, I saw you guys play at the Casbah in San Diego over 10 years ago (probably for the World Won’t End tour). I stood alone near the front of the stage as you played, while everybody else just kind of milled around, in and out on the patio, smoking, drinking, talking, etc–no one else seeming too interested in you guys (disheartening). I probably looked like a deer in the headlights, because it’s not my style to want to stand apart from the crowd too much. Except you guys rule, so I had to do it. I wanted to shout out “Square World” or any number of Scud Mountain Boys songs during the end of your set, but I felt like I was already tapping the bottom of my courage-well after being all alone in front of the stage that whole time, so I really couldn’t open my mouth and make words come out by that point. Anyway, you guys rocked my world that night, and continue to do so with your albums (I can never go too long without listening to a Pernice-project album.) I just wanted to say thanks, since I felt too shy to do so that night at the Casbah.

Keep being awesome. Thank you in advance.

does my heart good to see your interest in vintage bmx, Joe. i found my 1983 predator p2200 in the bmxmuseum gallery and welled up a little. i’ve since upgraded to a sub 17-pound road bike, but the rush is still the same.

see you around soon, hopefully with a twin-pronged percussion attack (i.e. w/ berkery in tow along w/ menck). that would boost the average height of the band quite significantly.