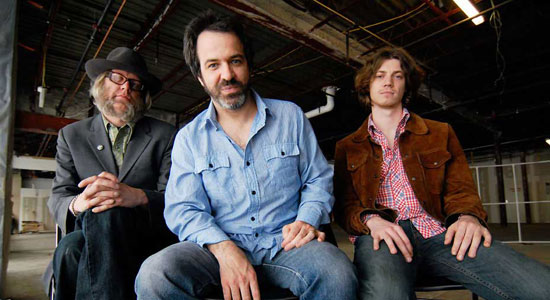 For more than a decade, the Pernice Brothers have mostly made plush, romantic orchestral pop that doesn’t gild the lily once tended by the Zombies, Walker Brothers and Elvis Costello. Despite the band’s refined sound and frontman Joe Pernice’s delicate vocal delivery (not to mention his MFA-in-poetry credentials), he’s from a blue-collar Boston background and more likely to be sporting a ballcap, T-shirt and three days of stubble than a blazer and button-down Oxford. The Pernice Brothers’ sixth and latest album, Goodbye, Killer (Ashmont), does away with the sighing string section and goes straight for the guitars, from the mod-rock riffing of “Jacqueline Susann” to the Teenage Fanclub power pop of “Something For You.” Flanked by guitarist James Walbourne (Pretenders, Son Volt) and drummer Ric Menck (Velvet Crush, Matthew Sweet), Pernice even pulls off a serio-comic country weeper titled “We Love The Stage,” an ode to the hopeless allure of being in a rock band, which includes playing to six people and having a kid yell “Freebird!” in your face. After a four-year spell between albums—Pernice published the novel It Feels So Good When I Stop last year and recently issued a volume of his conversations with manager Joyce Linehan titled Pernice To Me—the Pernice Brothers return with their leanest and most efficient effort to date. Pernice will be guest editing magnetmagazine.com all week.

MAGNET: It took me a long time to realize the theme running through your last Pernice Brothers album, (2006’s) Live A Little. A lot of the songs are about letting go of life’s little worries and being comfortable with who you are. Is that an accurate read on it?
Pernice: Honestly, I have no idea. I had no theme in mind. Honest to God.

Really? Because (the songs) “Somerville,” “PCH One” and “How Can I Compare” are all about relaxing a little and not letting the little stuff bother you.
Maybe it speaks to my limited vision. I’m not saying the theme is not there, but honestly, it was not my intention. It’s been a long time since I listened to that record, so I’d have to go check.

So I guess it’s safe to say the songs on Goodbye, Killer aren’t held together by any common thread.
Not so much. And it was written over a longer period of time, so even less I’d say. I checked in and out of making that record over the years. Inevitably, if you write songs in proximity to one another maybe they sound alike or there’s a theme, but I don’t really work that way. I guess by nature the songs come from me, so probably they’ll be similar.

I noticed there are no strings on the new album.
Except guitar strings.

Were you trying to get away from the more orchestral sound of a lot of the Pernice Brothers albums?
Yeah, I wanted to strip it down. There’s more space on this record than any of the others. Ric Menck plays drums on this record, and I don’t think there’s a drum fill—there might be one drum fill on the whole album. I know there’s not a single cymbal, because I insisted on it. There are hi-hats, but I wanted no cymbals. He had no problem accommodating that. Whenever there was an urge to add another guitar on the left or right, we just asked “Why? What’s it gonna add to the song?” Almost every time we said, “Don’t put it in.” It was much, much more subtractive than any other record.

I heard that Goodbye, Killer was originally not going to be under the Pernice Brothers name. What changed?
When I started, I put out records (under different names) but maybe the Pernice Brothers music fell into a category: There weren’t any country songs, the tunes were all kind of a pop thing. When I wrote songs that fell outside of that or maybe needed a couple different people to play on it, I would do a different project. I started out this record that way, too, and just finally said, “This is ridiculous.” I’m just gonna release everything under one name from now on and hopefully people are smart enough to understand that it’s all just music from the same guy. And if that’s too complex for people to handle, then that’s too bad. I just get tired of parceling out tunes. So I’m not doing anything except the Pernice Brothers unless it’s a band where I’m just one of the guys who maybe cowrites something and doesn’t sing all the songs. But if I wrote the song, I’m putting it out as the Pernice Brothers. Done.

Well, that should settle things for a while. Until the next interview.
Until I put out another record and call it Joe Pernice. Of all the records, though, this is probably the most Pernice Brothers. My brother (Bob) was more involved in this record than anything. He did all the recording and engineering on the record.

“We Love The Stage” is a song that probably hits close to home for a lot of people in bands.
You think? Same here. Closer than I’d like to think. It’s one of my favorites on the record.

The song mentions the band opening for a Welsh singer from the ’80s—who did you have in mind?
Just pulled out something absurd. I thought, “Who would be absurd?” Like some Welsh singer. I didn’t have one in mind.

So it’s not Bonnie Tyler.
No, but if someone thinks of a good one, I’ll take it.

How about Shakin’ Stevens?
That’s good. I like Bonnie Tyler, though. It’s not the guy from the Alarm, either.

I bought an Alarm album in high school and was so disappointed by it. I think it was the tail end of their career.
I saw the Alarm play a couple times. I was out of my mind on performance-enhancing drugs so I don’t recall it all that much, but I was probably cheering. It was outside, and it was a million degrees out but they were wearing all that leather and had super-moussed hairdos. They looked like a bunch of wet dogs by the end. The first EP they put out I liked a lot. Everyone thought they were the next U2.

Former Pernice Brothers drummer (and MAGNET contributor) Pat Berkery recently staged a tribute to Fleetwood Mac’s Tusk; he assembled a band and performed the entire album. But the funny thing is that even Pat would probably admit it’s not Fleetwood Mac’s best album. You wrote a book about Meat Is Murder and I was wondering if that was your Tusk: maybe not the Smiths’ best album but the one that affected you the most.
Oh, I think it’s the best Smiths album.

I always thought the recording sounded thin.
Oh, I love it. I like the first one but it all came together on Meat Is Murder. When I was asked (by the publisher) to write the book, the editor actually had The Queen Is Dead in mind. But I wouldn’t do it because that record isn’t that big for me. That one got a little too sparkly or polished; I love that album, but Meat Is Murder has it all. I love the acoustic sound with the bass. “The Headmaster Ritual” is probably my favorite song of the decade.

Maybe I dislike the way “How Soon Is Now?” is stuck in the middle of the record and doesn’t sound like anything else on there.
It wasn’t on the original, though. I didn’t care. It does stick out a little bit, though.

Is there still a screenplay in the works for Meat Is Murder?
Yeah, but it’s like one step forward, three steps back. The guy I’m writing it with (Neal Huff) is an actor and is pretty busy. I don’t know what’s going to happen with it.

You write in a lot of different formats: the novel, the screenplay and songs, obviously. It seems to me that song lyrics are the most unforgiving—if you write a clunker, you end up singing it over and over. And there’s not as much text surrounding it to cover it up.
For me, a song isn’t done until I record it. And once I record it, I move on from it. So I tend to not commit until I’m OK with it. Certainly a bad line you can’t get out of your head—I’ve had that happen. Like, “Why do I keep returning to this?” It takes a lot for me to sign off on a song and say I’m done with it. But writing the book was less about a bad line. I found it a lot more difficult writing prose because of having to get into the zone and write every day. You can get into the zone and write a song in one sitting and then you’re done, but with a book you’re creating people and getting back into the same mindframe where you left off the day before is a big challenge.

2 replies on “Q&A With Joe Pernice”

Thanks for choosing Joe for your weekly editor. So many artists have their heads up their own asses, but not so, Joe. Even in this small interview, he didn’t bite on potential high-brow thematic tie-ins between records, and as a result it was a great interview. Perhaps it’s the confidence of a talented journeyman shining through, or maybe he’s just not a self absorbed twat.

Yea, he’s not Robert Plant with pseudo-mysticism and symbolism—that’s for sure. But a screenplay in the works for Meat is Murder? That sounds about as ill conceived as Cop Rock.