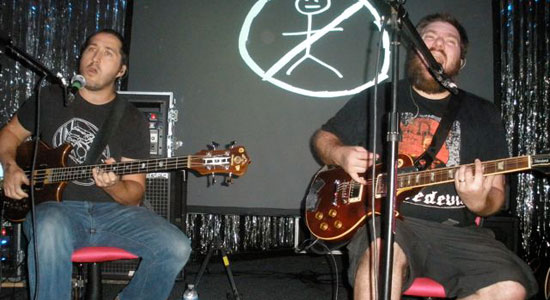 Everyone I encounter who knows Pinback has vehemently agreed the group of San Diego alt-rock alchemists is the best band you’ve never heard of. Flying under the radar for a decade, founders Zach Smith and Rob Crowe have churned out albums and EPs glutted with arresting beats, melodic guitar and bass and two-part harmonies that will make you want to dig out your discarded high-school journal and contemplate existence.

The city of San Jose has a negligible music scene consisting of Taylor Swift and Elton John pocket piracy at the HP Pavilion (when the San Jose Sharks aren’t tossing pucks around) and orchestra recitals frequented by the old and the rich. The presence of Pinback at the Blank Club was a welcome departure from the downtown area’s usual Friday-night routine of dive-bar surfing.

The venue was situated on an unoccupied side street, lined by about three cars. Stamping hands was a woman who was white-knuckling her Bic pen and looked like she’d dealt with her quota of drunks for the night. At first I wondered if I was in the wrong place, but then I spotted a few girls sporting asymmetrical haircuts and holding cans of Pabst Blue Ribbon. While waiting for the opener, I occupied myself by oogling the trippy lights spinning across the floor, as if I’d just smoked a whole month’s prescription from one of the “collectives” down the block.

After the initial ear-grating snoozefest forced upon us by Little White Teeth (or some combination of those particular words), The Rob and Zach Show, a pared-down version of Pinback, began their set with two somber ballads, strumming their instruments and reclining in their chairs.

“We’re touring just the two of us, as The Rob and Zach Show,” Crowe announced to the somnambulant crowd. “We came here to play songs we don’t normally get to play, and relax and have fun.” I groaned. “But we are too nervous to be having that much fun.” For the next 45 minutes, the duo made good use of the drum machine on songs like “Fortress” and “Non-Photo Blue” to liven up the club and get everyone grooving.

Any person at the Blank was only a few feet away from Crowe and Smith. The low-rise stage was a resting spot for many a discarded drink, and after the show Crowe exchanged emails with several fans. When I spoke with him after the show, he told me a new album was in the works. “We have about five really good ideas so far,” he said. As much as I appreciate their music, I almost hope their upcoming record isn’t a hit. Then the next time I see them, I’ll be sipping an $8 Diet Coke and peering through binoculars on the opposite end of the Shark Tank. Half their charm is the fact that they’re all mine.

Lol. I love coveting Pinback and I feel so proud that so few people know about them;)