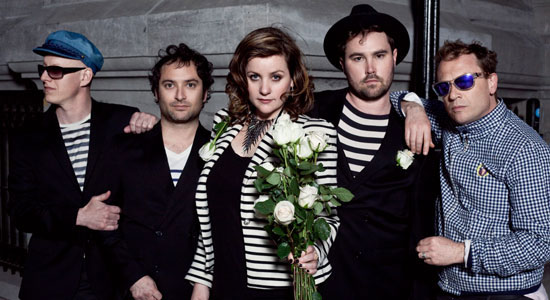 If there’s one thing Canadian quintet Stars has been able to do for the entire duration of its 10-year run it’s make us sigh wistfully over beautifully crafted lyrics and gorgeous, blooming melodies. Since 2007’s In Our Bedroom After The War, the band members (many of whom moonlight as Broken Social Scene players) scattered for a while to work on some very un-Stars-like solo and side projects. However, rest assured that just-released fifth full-length, The Five Ghosts (Vagrant/Soft Revolution), is Stars still being heartbreakingly Stars, with an underlying theme of mortality featuring lyrics that focus on love in a “til death do us part” kind of way. Prepare to swoon when you see them play the album live on their tour of Europe and North America this fall. Evan Cranley, Torquil Campbell, Amy Millan, Chris Seligman and Patrick McGee will be guest editing magnetmagazine.com all week.

MAGNET: You guys have been together for 10 years, and The Five Ghosts is your fifth album. Does it get easier writing and working together as a band after all that time?
Cranley: We are all quite familiar with each others’ styles by now. And the chemistry is still there. The important thing for me is not repeating ourselves. I try to avoid that at all costs. The thought of it terrifies me. Is it easier? No. When you start a new process, it’s like everything you created as a band before disappears. You’re only left with a fresh sheet of paper. So it becomes more of a challenge starting anew.

What led to the decision to release The Five Ghosts in Canada on your own record label, Soft Revolution Records?
It’s nice to have a home base, a place where your aesthetic can live. I think of it as a self-imposed cureation.

Also, you returned to producer Tom McFall, who produced Set Yourself On Fire, for this album. How come? Is it easier to work with someone you’ve worked with before?
In this case, absolutely. Tom was like a sixth member in the band. We felt so comfortable with him. He acted like a creative filter for us. Not only is he a great engineer and producer, he’s a gifted musician. And that combo is hard to find. We love Tom McFall!

How has audience reception been to The Five Ghosts, since you’ve been playing it in its entirety on tour?
It’s been very interesting and challenging. We essentially leaked the record live onstage. And you can tell right away that it’s the fans out in the audience. It’s been amazing watching the reaction to the tunes. You can tell what people like/dislike right away. It’s like the band is being reviewed. Only with love, of course.

You’ve also been taking audience requests for shows. What have been the most requested songs so far?
“Your Ex-Lover Is Dead.”

Some of you have embarked on solo jaunts and side projects between Stars albums. How does that affect the songwriting dynamic in the band?
Much more country than usual.

Speaking of other projects, you recorded a cover of the Smiths’ “Asleep” for Sing Me To Sleep: Indie Lullabies. Can you tell us a little about that album and how you got involved.
They wrote to us. “Asleep” is a natural suicide anthem for four-year-olds. What could be more appropriate?

Does it ever get difficult to get the band back together with all your other commitments?
You do what you have to do, but yeah, it can be complex.