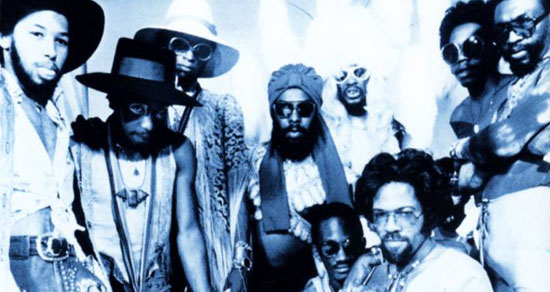 :: The Five Most Overrated Parliament Songs
1. “Give Up The Funk (Tear The Roof Off The Sucker)” (1975)
Mothership Connection was the album on which Parliament fully nailed down the arrangement it would adopt until its disbanding in the early ’80s: interlocking vocal lines, fat-ass bass runs and endlessly repeatable dancehall chants. (It also was the first album to pose the Great Divide that dogged the band’s aesthetic: the vast gulf between those who have the funk and those who emphatically do not.) “Give Up The Funk” is a great jam, but like many of Parliament’s heavily sampled and copped songs, it’s got a single move. It’s a genius move, but many more interesting songs languish in the archives while “Give Up The Funk” gets trotted out again and again for extended mixes and live performances. It’s one of the band’s warhorses, and a stone crowd favorite, but allow me to suggest that even a warhorse ought to get brushed and stabled every now and then, lest it run itself ragged and straight into the glue factory.

2. “P-Funk (Wants To Get Funked Up)” (1975)
Apart from being the Parliament track with the highest ratio of the word “funk” to total words in the song, “P-Funk (Wants To Get Funked Up)” is irreversibly yoked to Dr. Dre’s “Make my blunt the chronic” run on The Chronic. It’s unfair to bust the song solely on that score, but long before Dre, P-Funk had become a recognized reference point in popular culture, even turning up as a joke in Spike Lee’s film School Daze. When a song is so well known it can serve as a punch line, it’s likely come to overshadow other equally deserving tracks.

3. “Do That Stuff” (1976)
One of Parliament’s poppier songs, from the cartoony The Clones Of Dr. Funkenstein, “Do That Stuff” is a simple, brass-heavy party track, and on that level it succeeds admirably. Included on 1984 singles compilation Greatest Hits (The Bomb)—at a tight 50 minutes, still the best entry point for uninitiated listeners, if any still exist—it’s a standout. Even held up against some of the other tracks on Clones, however (notably “Gamin’ On Ya!” and “I’ve Been Watching You [Move Your Sexy Body]”), it’s something of a placeholder, and not at all representative of that album’s greatest strengths.

4. “Mothership Connection (Star Child)” (1975)
Everything in me wants to bash my typing fingers with a ball-peen hammer rather than include “Mothership Connection” as an overrated track. The shit’s both formally flawless and essential to the Parliament canon, from the introduction of the Star Child persona to the “if you hear any noise, it’s just me and the boys” run to the “let me ride” bridge. But just behind the superior “Flash Light,” the title track from the first truly great Parliament album is the most over-mined, overplayed song in the band’s catalog. And for that reason, if for no other, I wish the legions who revere the endlessly sampled and referenced “Mothership Connection” would follow that signpost into the deeper layers of the band’s music. Sadly, it’s become the “Like A Rolling Stone” of funk: a cut whose ubiquity often serves as a too-handy avatar for the group’s larger achievement.

5. “Aqua Boogie (A Psychoalphadiscobetabioaquadoloop)” (1978)
“Aqua Boogie” is the best-known track—the signature single, actually—from Motor Booty Affair, Parliament’s most unfairly overlooked album. And here’s the rub: Listen to the song in sequence with the others on this “overrated” list, and apart from the “Sir Nose” spoken interjections that thread through the song, not much differentiates it from the groove-and-repeated-lyric aesthetic that dominates the group’s most popularly beloved numbers. But the trick to these bombastic, memorable songs in their original settings (and Parliament was always, always a better “album” band than a “singles” band) is that they marked a focused point on the records, surrounded as they always were by weirder, stranger workouts. They achieved a distillation of the albums’ themes into a catchy, groove-heavy five or six minutes. On Motor Booty Affair, “Aqua Boogie” is the moment when the funk overwhelms the funk-negative Sir Nose, and it’s a joyous, hysterically funny song. Ripped from that context, it’s difficult to hear “Aqua Boogie” as anything but a revisiting of similar approaches on other records. That’s not only a limiting of the song; it’s a misrepresentation of Parliament’s unique creative spirit.

:: The Five Most Underrated Parliament Songs
1. “Come In Out Of The Rain” (1970)
How long has it been since you heard Osmium, Parliament’s earliest album? Well, it wouldn’t matter; “Come In Out Of The Rain” wasn’t on that record, but it dates from the same period and has been thankfully included on First Thangs, the Fantasy label’s cheesily titled reissue of Osmium with half a dozen bonus tracks. The memorable chorus of “Come In Out Of The Rain” showed up on subsequent releases inserted into other songs, but the original version is a great, politically conscious soul workout from the days before Parliament had settled into its funk groove. In addition to providing the earliest view into Funkadelic and Parliament’s divergent paths, the song manages to tout comprehensive social change while calling the militant wing of the protest movement on using rhetoric that was as violent as America’s Vietnam-era hawk contingent.

2. “Mr. Wiggles” (1978)
See entry number five above for a précis of Motor Booty Affair; that album’s conceit was all about water, swimming, sinking into the briny depths of funk. And “Mr. Wiggles,” the opening cut, laid out its loose approach in a self-assured mélange of the themes and voices that were to recur throughout the record. The first tracks on any Parliament album are always worth paying attention to, as George Clinton approached them as overtures, opening sallies that telegraphed the records’ overarching themes. “Mr. Wiggles” initially doesn’t sound like much, but the wobbly, wiggly, squirmy leadoff provides a coy glimpse of the confident metaphor that holds the record together, and it does so better than virtually any introduction to any Parliament album.

3. “Sir Nose D’Voidoffunk” (1977)
The incredible Funkentelechy Vs. The Placebo Syndrome is Parliament’s giant step, a blend of high-concept lyrics and ass-shaking arrangements, and the album is bookended by two unforgettable tracks, “Bop Gun (Endangered Species)” and “Flash Light.” But “Sir Nose D’Voidoffunk” and the similarly extended “Funkentelechy” are that album’s most criminally overlooked moments, and taken together for their combined 20-plus minutes, they illustrate what propelled Parliament light years ahead of its contemporaries. Imagine Kool And The Gang, fine as that outfit was, attempting anything like “Sir Nose.” Unthinkable.

4. “Night Of The Thumpasorus People” (1975)
This is the victory-lap cut on Mothership Connection, unfairly muted by that album’s better-known tracks. Sequenced in the final position on the record, “Night” sounds like a post-workout stretch, unsuited to memorable singalong like Mothership’s better-known songs—indeed, most of its lyrics are nonsense syllables—but somehow it spins like Clinton and Co. understand exactly what they’ve accomplished on Mothership and are content to leave the stage with an audience-pleasing vamp, driven by horns (courtesy of Maceo Parker and Fred Wesley, late of the J.B.’s and the phenomenal Becker Brothers) and Bernie Worrell’s magnificent synthesizer runs.

5. “The Goose” (1974)
And here’s the look-back moment, from Up For The Down Stroke. Where the rest of that album pointed toward Parliament’s reinvention of funk for the ’70s and beyond, “The Goose” takes a final moment to look over its shoulder into the mélange of acid rock and R&B from which the band grew. It’s slow and stretchy, like the most thoughtful of Parliament/Funkadelic’s work to that point, but it also reaches forward into the uncharted territory the band was about to embark upon. Very few bands had pointed the way—James Brown’s Apollo albums provided the most reliable map—but Parliament drove the rest of the route so confidently that after Get Up For The Down Stroke, there wouldn’t be many familiar landmarks by which to navigate. No one’s going to put “The Goose” up as Parliament’s most indelible performance, but as it’s the last bridge to be burned between that group and Funkadelic, it bears a historical weight that ought to be acknowledged.

One reply on “The Over/Under: Parliament”

Apparently, “Fantasy Is Reality” is so underrated that it can’t even make a list of underrated Parliament tracks. What does a song that sounds like the opening number of an acid-gospel high school musical have to do to get recognized, people? Be filled with wall-to-wall freakout guitar? BECAUSE IT HAS THAT, TOO.