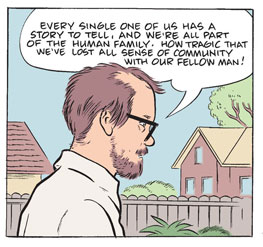 Franklin: Spring saw the return of Dan Clowes with his new graphic novel Wilson. Clowes is probably best known for his 1997 Ghost World, which was turned into the 2001 movie of the same name, but there have been many other great stories over the years: Like A Velvet Glove Cast In Iron, The Death Ray and the collection of tales in Caricature, to name some. I’ve loved Clowes’ work ever since he first appeared in the late ’80s with the hilarious Lloyd Llewellyn comic series that was this kind of ’50s, Twilight Zone, b-movie type thing all about our hero, the hare-brained hipster private eye in the big city and his run-ins with assorted aliens, weirdos and rock ‘n’ roll musicians. I found lyrical inspiration there, and there’s a line in the Swervedriver song “Rave Down” (“4 a.m., all-night-hell gas station”) which is a direct description of an LLLL frame where Lloyd smokes a cigarette at a Shell gas station where the “S” has fallen from the sign. Clowes’ work almost always deals with outsiders and misfits and exists somewhere in the nether regions between the real world and somewhere more kitsch and surreal.