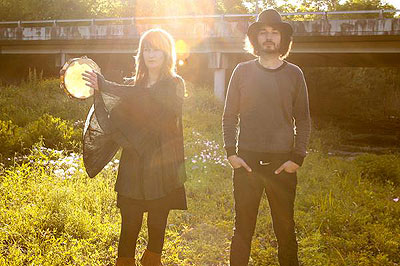 Austin-based married couple All In The Golden Afternoon named its upcoming second release, Magic Lighthouse On The Infinite Sea, after its recording studio: the top of a lighthouse in Johnson Bayou, La. Album track “Gulf Coast Highway” features hushed vocals drowning in guitar-laden noise rock that’s (almost) as heavy as the waves crashing below. The effect is a little unsettling—more like frontwoman Rachel Goldstar’s cry for help than a folk ballad, with her repeating “She cries all the time,” her voice trailing from the candlelit practice space into the deepest corners of the night.

One reply on “MP3 At 3PM: All In The Golden Afternoon”