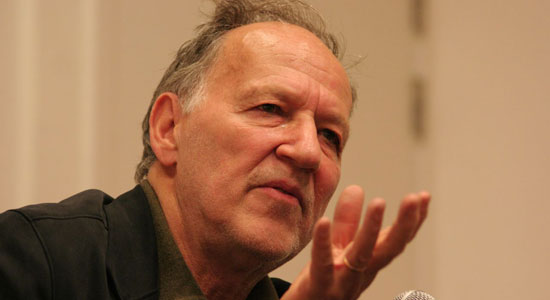 Jenny: Werner Herzog is a man whose life is about as interesting as his body of work. Just watch Even Dwarves Started Small (and listen to the commentary) and, most recently, the remake of Abel Ferrara‘s Bad Lieutenant (which Herzog claimed to have never seen before remaking it, much to Ferrara’s dismay). As this interview with Defamer illustrates:

Speaking of which, the original film’s director, Abel Ferrara, has vowed to fight this project, and—
Wonderful, yes! Let him fight! He thinks I’m doing a remake.
Have you talked to him?
No. I have no idea who Abel Ferrara is. But let him fight the windmills, like Don Quixote.
Have you heard his comments at all? He says he hopes “these people die in Hell.”
That’s beautiful!
Do you relate to that passion?
No, because it’s like theater thunder. It’s like being backstage in the 19th century, with the machines that make thunder. It has nothing do with with his film. But let him rave and rant; it’s good music in the background.
You did a remake before with Nosferatu, but—
It was not so much a remake as an homage to Murnau. But I don’t feel like doing an homage to Abel Ferrara because I don’t know what he did—I’ve never seen a film by him. I have no idea who he is. Is he Italian? Is he French? Who is he?
Oh, come on.
Maybe I could invite him to act in a movie! Except I don’t know what he looks like.

I love this man! And I really loved this movie. If you want an insight into Herzog’s world, watch the Burden Of Dreams, the documentary shot while making the ill-fated Fitzcarraldo.