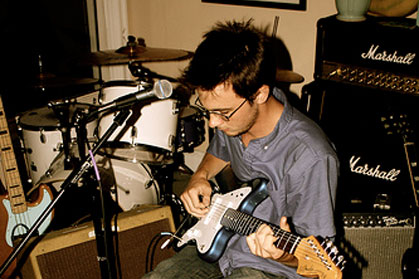 Moon Deluxe, the debut LP by former Titus Andronicus guitarist and keyboardist Andrew Cedermark, is scheduled for release tomorrow on Underwater Peoples. While he currently lives in Charlottesville, Va., like the majority of bands and artists the label has worked with—Ducktails, Real Estate, Family Portrait, Julian Lynch, Fluffy Lumbers, Alex Bleeker—Cedermark hails from New Jersey. However, while most of his labelmates play beach pop, there’s a refreshing gloom that reigns supreme on Moon Deluxe‘s title track, allowing Cedermark to stand apart from the summery herd. The opening acoustic-guitar phrase is quickly joined by a feverish electric riff that brings to mind some of Keith Wood’s guitar work on Hush Arbor’s 2008 eponymous album. When the raw fuzz of Cedermark’s string-bending fury is peeled back, his delicate vocals prove warm and anguished. Despite the pummeling drums and overdriven haze, there’s a strong pop presence provided by the xylophone (glockenspiel?) that cleverly colors the chord changes during the chorus. Clocking in at just under five minutes, this is an epic first single and a sign of good things to come. And here’s a bonus mp3 for “Hard Livin’.”