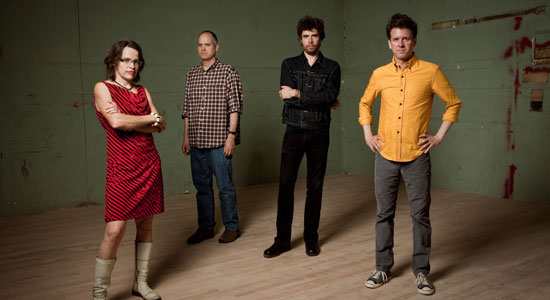 Don’t call it a comeback, Superchunk‘s been here for years. The band members just haven’t been doing anything since the release of 2001’s stellar Here’s To Shutting Up (a title that, coincidentally or not, proved partially prophetic). Well, not much together, anyway, apart from a few one-off gigs and the occasional single. Singer/guitarist Mac McCaughan and bassist Laura Ballance have their hands full running Merge Records and raising families (plus McCaughan has released a number of fine Portastatic records); drummer Jon Wurster has toured and/or hit the studio with the likes of Robert Pollard, the New Pornographers, Bob Mould and the Mountain Goats in between hilarious Facebook postings and Best Show On WFMU appearances; and while we’re not sure what guitarist Jim Wilbur has been up to, other than gigging with Portastatic, he probably has a lot on his plate, too. It’s a wonder the busy quartet was able to reconvene for the fine Majesty Shredding (Merge), a more-than-welcome return that’s accompanied by the band’s first full-on, albeit relatively brief, tour since 2001 (including a stop in Las Vegas for the three-day Matador At 21 shindig). And, yes, the new LP features plenty of shredding on tunes like the taut “Learned To Surf” and closing blowout “Everything At Once.” McCaughan and Ballance found empty moments in their schedules to discuss the joys of the road and how the band didn’t break up, even if you thought they did. Superchunk will be guest editing magnetmagazine.com all week.

MAGNET: The obvious question, and likely the most tedious one to answer by this point, is why the gap between records?
McCaughan: I guess it’s kind of all the reasons you’d think. We decided after all the touring we did for Here’s To Shutting Up to take a break for awhile. We were pretty burnt on touring, being away from home and being around each other. I think half the band wanted to call it quits, but I didn’t see the point in announcing that. We’ve enjoyed playing a few shows a year since then without ever having to get into full-on tour mode, but we also realized that playing shows would be more fun if we had some new songs to play. We’d been talking about making a new album for a while but had to figure out a way to do it that worked with our new mode of existence. We weren’t about to go camp out in a studio in Bloomington or Boston or Chicago for a couple weeks, nor were we going to get together three times a week to work on songs for four months. So in some ways we reverted to how our first couple records were written. I made demos of songs and sent them around to everyone else in the band—via the Internet instead of cassettes this time—then we learned the songs quickly, usually a day or two before recording, and recorded the basics in sets of three or four songs over a weekend at Overdub Lane Studios in Durham, N.C. Then I’d take the basic tracks back to my house and work on them by myself, adding overdubs, vocals, keyboards, etc., and send the finished songs off to Scott Solter, who recorded the basics and then mixed the songs at his place in Western North Carolina. It sounds kind of convoluted, but it was actually a pretty streamlined process and worked well for how busy everyone is with everything else they’re doing in their lives. Finding a way we could work, and a year when we could make space to play shows once the record was out, facilitated the album, but we’d been talking about it for a while.
Ballance: When Here’s To Shutting Up came out, I remember feeling pretty fed up with touring. Merge was starting to really take off and take up more and more of my time, making it really hard to tour. Of course, it came out in September 2001, leading to the most depressing world tour ever, and that pretty much sealed it.

You’ve gotten together at various points to play one-offs. Was touring behind the new record a given or did anyone have to be talked into it?
McCaughan: We all knew we wouldn’t be touring like we used to—six or eight weeks at a time—but we all realize that if we’re bothering to make a record then we need to support it. Plus, playing live has always been something fun for all of us and a strength of ours, I think, so no one had to be talked into it. We just had to do it in a way that kept it fun.
Ballance: Playing one-offs is always really fun and reminds me of the good things about being in a band. Being onstage is fun and addictive, and hanging out with my bandmates can be really hilarious. I’m the one who mostly has to be talked into everything, touring especially. I’m not looking forward to being away from my kid and the office.

Though it’s relatively short, the upcoming tour will be the most extensive one you’ve done in a while. What’s the prevalent feeling: trepidation or excitement?
Ballance: A little of both. What if it sucks? Will people show up? New York will be fun for sure! It’s already sold out!
McCaughan: There’s a sense of not really knowing who out there cares anymore about Superchunk, how many people will be at the shows, etc. But it’ll be exciting to have new songs in our set and to get to some places where we haven’t played in a while. Trepidation is involved in realizing we first have to learn these new songs, many of which we’ve only ever played in the studio.

When I saw you in Chicago in June, one of the friends I was with thought the band had broken up and was reuniting for a tour. Have you been getting a lot of that kind of question because of the gap in releasing a record?
Ballance: Remarkably, no, I haven’t been getting that question at all. I expected it. But I guess we’ve played enough shows in the interim that anyone who has been paying attention knows we didn’t break up. Not to dis your friend.
McCaughan: For those who haven’t really followed the sparse activity of the last nine years, they rightfully probably think that we just broke up. Maybe they’ll be the most excited about seeing us on our “reunion tour”! The gap really put pressure on us to make a great album, I think. You don’t want to go away for nine years and then make a record that makes people say, “Why’d they bother coming back for that?”

Was there ever a time when you considered breaking up?
McCaughan: Oh, for each of us probably a few times every tour, but luckily never all at the same time. I didn’t want to break up and have “last shows” and then realize, “Oh, I wish we could play this benefit concert” or “I wish we could play Coachella now that they asked us” and then have it be the whole “comeback” thing. That’s just not really our way of doing things.
Ballance: It was discussed briefly, and we decided that it was dumb. We still wanted to play together.

That crowd in Chicago was part of a food-related festival. Have you played a lot of those kinds of show over the years? There seemed to be a lot of diehards but at the same time a lot of people in back not paying much attention.
Ballance: I guess we’ve done a few. We played another street festival one time in Charlotte in between a Beatles cover band and the Village People. About 10 kids showed up who wanted to hear us. The other folks were running away with their hands over their ears.
McCaughan: Indie-rock bands playing street fairs wasn’t so much the thing when we started, and there are so many more festivals now inviting bands like us to come play—this summer, we played festivals in Barcelona, Denver, Chicago and Omaha—that I told our old booking agent he retired too soon. I was a little worried the vibe would be weird, but these shows have been really fun. You see the people rocking out in front of you, not the people eating funnel cakes at the back. The people doing both are the best.

Playing a classic album in its entirety is a big trend now. Any thoughts of ever doing that?
McCaughan: The idea is not terribly appealing, other than thinking, “Could we even do it?” There are songs on all of our records that we’ve rarely, if ever, played live. For me, I don’t like the idea of seeing a band and knowing what song is going to come next. We could probably, if pressed, play any of them in their entirety, but it would require some serious woodshedding.

When Wurster was playing in Bob Pollard’s band a few years ago, he lathered on Ben-Gay before shows. Will that be allowed on this tour?
Ballance: He did? I guess it was probably quite the endurance test. If he wants to he can, but I may require a fan to keep the smell away from me!
McCaughan: As long as I get to do the lathering, any and all ointments and salves will be welcome on this tour.

What other concessions to age might be in store for you guys on the road?
Ballance: Jim has conceded to age from the time he turned 21. Maybe back braces and orthopedic shoes?
McCaughan: I’ve always stretched in kind of a half-assed way before shows, but I need to do it in more of a full-assed way these days or I’m seriously hurting the next day. We played five shows in a row in Japan last December, and my body didn’t know what it did to deserve that.

Wilbur’s been known to drink wine on stage. Acceptable or rock faux pas?
Ballance: When you’re as ancient a soul as Jim Wilbur, you can do whatever you want.
McCaughan: I think it’s kind of cool because it’s slightly anachronistic for an indie-rock band. I drink wine at home, but for some reason I can’t do it when rocking. Maybe I should try something new. Do they still make Zima?

3 replies on “Q&A With Superchunk”

Superchunk branded Zima would be the best thing of all time.

[…] Precision Auto when they came anywhere near our southern state.Right around the time Superchunk decided to take a break, I decided to move to Rockford, IL. That era of my life seemed to be over and in someways so did […]

[…] Precision Auto when they came anywhere near our southern state.Right around the time Superchunk decided to take a break, I decided to move to Rockford, IL. That era of my life seemed to be over and in some ways so did […]