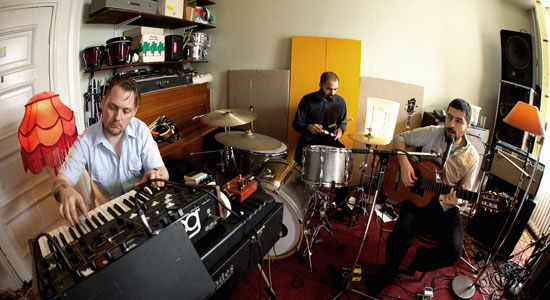 Fans of Swedish indie rock, rejoice: After four years of inactivity, the eclectic popsters in Junip have reunited to record their first full-length album. The trio—vocalist/guitarist José González, keyboardist Tobias Winterkorn and drummer Elias Araya—formed more than a decade ago in its hometown of Gothenburg and released a well-regarded EP in 2005. Soon after, the trio parted ways to pursue different avenues. González made a major name for himself with his solo work, while Araya went off to study art and Winterkorn turned to teaching. Earlier this year, the three came back together to record a new EP, Rope And Summit, a teaser for the brand new Fields (Mute), an album that represents an extension of Junip’s delicately abstract sound, with loping organs, exotic rhythms and González’s trademark dreamy vocals. The trio’s intoxicating mix will soon get the live treatment, as it supports the release with tour dates in Europe and a trip stateside in the fall. The members of Junip will also be guest editing magnetmagazine.com all week.

MAGNET: José and Elias started playing at just 14 years of age. Who were your musical heroes growing up? And what inspired you to start your band?
González: When we started playing music together, we were listening to Misfits, Dead Kennedys, NOFX, Public Enemy, N.W.A. We played in a hardcore band for some years, but we were also listening to more melodic music like the Van Pelt, Low and Karate. During these years, I was also learning classical guitar and writing acoustic (cheesy) songs on my own. I used to play my demos to Elias, and around ’98 he suggested that we could try them out as a band. So we did: Elias on drums, Tobias on organ and Moog, and I would sing and play nylon-stringed guitar.
Winterkorn: I know that José listened a lot to the Beatles and Silvio Rodríguez, and Elias’s biggest star was Michael Jackson. But I think it was punk and hardcore music that inspired them to start a band: Bad Brains, Black Flag, etc.

You’ve been playing for a span of 12 years now. How have you guys progressed as a band together?
González: When we started to write Fields, it felt like starting a new band in the sense of not feeling tied up to any particular style. All the songs are new, and a lot of our inspirations are different from what we were into 12 years ago. While we were jammin’, we naturally fell for the more up-tempo and slightly happier songs.
Winterkorn: We’ve been apart from time to time during the past 12 years, so I think that we progressed as musicians and human beings on our own and not as “Junip.” But every time we met to make music, it hasn’t been that hard to come up with good ideas.

You guys had a four-year gap between recordings. Why the long layoff?
Winterkorn: Many different reasons. We all have been working and studying from time to time, and José has been busy conquering the musical world. We need a lot of time to come up with material that we like, and we didn’t take the time we needed.

José, you have found success as a solo artist. Why did you feel it was the right time to turn your attention back to Junip.
González: I had wanted to give Junip a go for a very long time. It’s all about finding the time between albums to have enough time for us to write.

Was it a group decision to start Junip back after some time? Was everyone on board at first?
Winterkorn: José had just finished In Our Nature, and we sat down to listen to it together. After that, we decided that after José followed up his album we should really give Junip a try. Then, Elias and I started to build a studio in our rehearsal space. We all felt that there it should be now or never.

Tobias, while José was focusing on his solo work, you were teaching philosophy at a university. Were you still playing music? Did you miss the music scene?
Winterkorn: I was actually studying philosophy, and I taught social studies. At the same, I was building a recording studio where I tried a lot of different projects with different instruments. Maybe I missed the live part of music, but I was hoping that someday I be back onstage in one or another way.

How is Fields different from your earlier work? Did you go into the recording process with a set idea of the sound and vibe?
Winterkorn: The main difference is that the music is not that slow, boring and dramatic anymore. We listened to a lot of “slow” bands back then such as: Songs Ohia, Karate and Low, etc. So those bands influenced us then. When we started to make music in 2008 that turned out to be an album, we hadn’t any idea of sound or anything. But the jam sessions turned out to be groovier and more monotone then we could imagine. It felt right and fun.

Junip covers a Springsteen song on your Black Refuge EP, and José is well known for his solo covers. Why did you decide to keep them all original tracks for Fields?
Winterkorn: It is time for other bands to do Junip covers. We are done making covers.

The song “Rope & Summit” has some references to suicide. Have your lives been touched by suicide?
González: No. It’s more about struggle and setting goals.

José, do you have future plans for another solo album or is all your attention going to be focused on Junip?
González: I’m writing some songs now and then, but I hope to release albums more often, both with Junip and solo.

What are you most looking forward to when you tour the U.S. this year?
Winterkorn: Good food, great shows, nice people and no snow or winter!

The band has a distinct musical vision and sound. Do you have any words of advice for younger musicians with dreams of their own?
Winterkorn: Hm. No, not really. Rock on, and keep it real!