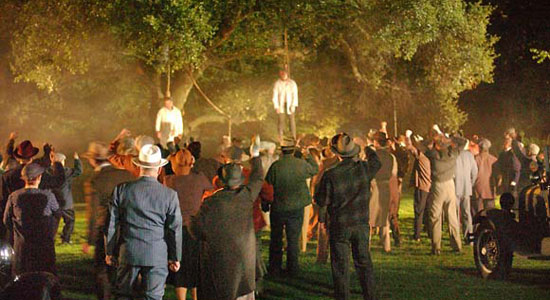 Why bother reviewing a movie released in 2006, four years after the fact? Apparently, Valley Of The Heart’s Delight was shown at a San Jose film festival as a work-in-progress in ’06, got lousy reviews from the attendees and was subsequently “fixed” by adding new music and a different opening-credit sequence. Or so they thought. Better they should have tossed the entire production into the nearest roaring fireplace. It’s hard to believe this movie could ever have been much worse than it is now. You and a couple of your friends could have done better without any film-school training. But there it was, for a short run last week at San Jose’s Camera 3, playing before crowds that could have fit into a large phone booth.

At one point, Heart’s Delight must have seemed like a can’t-miss proposition. It’s a retelling of San Jose’s darkest hour, when two suspected kidnappers and murderers of the son and heir of the owner of Hart’s department store were seized from the local jail by an angry mob and lynched in nearby St. James Park in 1933. What could possibly go wrong with turning this into a low-budget blockbuster? Where do you start? How about amateurish, hamfisted directing by Tim Boxell in his maiden feature-film effort? You’d expect more from somebody who cut his teeth on a couple of made-for-TV movies. A lousy, cliche-ridden script from Miles Murphy gets laughs in all the wrong places by tacking on a painful love “interest” between the two leading characters. Hiro Narita’s murky camera work gives this the feel of Super 8 film in somebody’s backyard. And the editing job appears to be a random sequence of unconnected events.

The use of vintage, Depression-era automobiles, driven very slowly, screams out, “If any of these cars comes back with so much as a scratch, our budget is screwed!” They’ve even managed to forfeit any historical interest here by changing all the names of the characters and tacking on a flimsy “they hanged the wrong guys” sub-plot. Every 10 minutes the script calls for somebody, for no apparent reason, to refer to what’s now known as Silicon Valley as “the valley of heart’s delight,” usually in front of a chamber-ofcommerce billboard extolling the virtues of, you guessed it, “the valley of heart’s delight.” We get it, we get it.

And then there’s the acting. Every scene (and there are plenty) with Gabriel Mann (as cub reporter Jack Daumier) making goo-goo eyes at Emily Harrison (as Helen Walsh), the well-heeled sister of the murder victim, reminds you of the worst high-school play you’ve ever seen. Their onscreen chemistry is the sound of two department-store mannequins colliding. How somebody managed to rope respected character actors Bruce McGill (D-Day from Animal House) and Pete Postlethwaite (recently seen as a scary crime boss in The Town) into this fiasco is anybody’s guess. Is blackmail too strong a word?

Boxell and Co. even manage to sleepwalk here through what should have been the climactic scene, the lynch mob in the park, filming it without any sense of anarchy or danger. It feels more like a San Jose State fraternity prank, a Friday night TP-ing of the sorority next door, than a horrific act of lawlessness. The film’s long-anticipated final scene shows a pregnant Helen Walsh and dad-to-be Jack Daumier, sitting by the fireplace, vowing to name their baby “whether it’s a boy or a girl” after her dead brother. It could have been worse. Somebody cut the part where Lassie trots in with a string of newborn pups and everybody laughs.