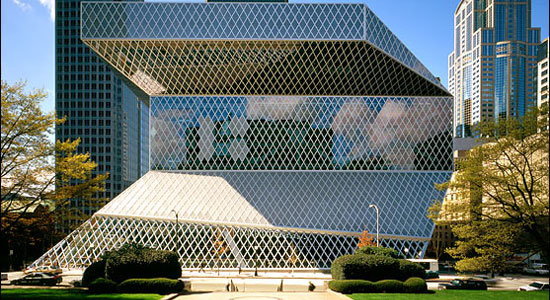 Yorn: One of the best things about being on tour is being able to explore cities on your days off. It’s always fun to find a nice place to eat or wander around, but sometimes a town will offer something totally unique. I had heard that the new Central Branch of the Seattle Public Library was one of those spots, so I checked it out on a day off last year. It’s this massive, wildly shaped reflective structure downtown designed by the Dutch architect Rem Koolhaas. Inside there are video projections, neon escalators, a womb room and pillows on the ceiling. This place looks like no other library I’ve ever been in. I highly recommend taking a tour. The bulk of the building is taken up by the stacks, which they call the “book spiral.” It’s just one long continuous spiral of shelves on a slight incline that reaches up four stories. I can’t imagine how many books are in there. And there’s enough space in these stacks so that they can keep adding new books for a while without the fear of running out of space. It’s definitely worth visiting.