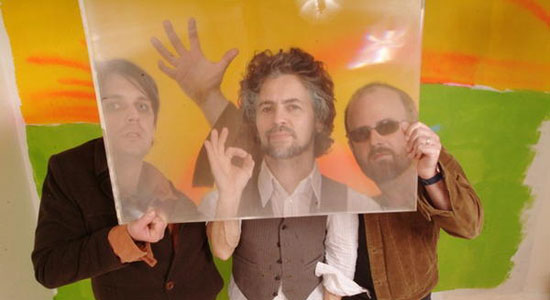 Night One: The Flaming Lips

“Mother of God!” blurted out a young girl when she first glimpsed the Flaming Lips‘ flickering ace in the hole at the rear of the Fox Theater’s roomy stage. Clad in fluorescent orange jump suits, some topped with platinum blonde wigs, the Lips’ crew of two dozen scurried about moving amps, but the major piece of equipment was already in place: an eye-opening 30-by-60-foot Jumbotron-like screen resembling the face of a giant parking meter, trimmed with art-deco curves. Just the sight of this electrical marvel must have made any employees of Pacific Gas & Electric in the house rub their hands with glee. And then they turned it on. The electric colors blasting from the enormous screen were overwhelming, bright enough to singe the retinas of the unwary.

From out of nowhere, Lips ringmaster Wayne Coyne stepped to the front of the stage with a disclaimer. He warned anyone with a severe reaction to strobe lights (meaning those with epilepsy) “to cover your eyes if you feel a little weird. We plan to crank up the strobes to maximum capacity tonight. And that’s what you want, isn’t it?” Coyne added that members of their crew with light-sensitivity problems had worked through it, night after night. “We want you to stay until the end of the show, too,” he urged.

Things were so much simpler the first time I saw the Flaming Lips play in San Francisco. They drove all the way from Oklahoma City for one night at tiny Haight-Ashbury hot spot the I-Beam in August 1985. They cranked out tunes from their self-titled debut 12-inch EP, including psych-garage killers “Bag Full Of Thoughts” and “My Own Planet,” then turned the van around and drove back to Oklahoma. It was probably the wildest sound from that part of the country heard in these parts since Austin’s 13th Floor Elevators turned the Fillmore and Avalon ballrooms upside down in 1966.

After his warning speech, Coyne disappeared for five minutes. Then the glowing behemoth in the back was switched on, and all hell broke loose. A giant, naked, gyrating go-go dancer assumed the giving-birth position while the camera zoomed in on her vagina, now turned into a cornucopia of throbbing dayglo colors, expanding and expanding, until suddenly Coyne burst through a door in the middle of it and walked onstage, followed by his bandmates—keyboardist/bassist Michael Ivins, guitarist Steven Drozd and drummer Kliph Scurlock—reborn and ready for anything.

In the middle of some grinding psych masterpiece, a man dressed in a bear costume began sparring with Coyne, who sang the rest of the song perched on the shoulders of the man-bear. Then came a cascade of multi-hued, four-foot-tall balloons tumbling all around the cavernous hall, recently retrofitted top to bottom in a neo-Egyptian/Assyrian motif. “Next time we’re here, we’re going to play on the ceiling,” said Coyne, directing the audience’s attention to the beautifully filigreed concrete level above, now dispensing thousands and thousands of one-inch squares of crepe paper, slowly fluttering towards the floor, a trip that took at least 15 minutes to complete.

Of course, the Lips also played sing-along versions of lusher, more melodic pieces like “Yoshimi Battles The Pink Robots,” from their 2002 Dave Fridmann-produced album of the same name, as well as “She Don’t Use Jelly,” a hit from 1993’s Transmissions From The Satellite Heart, while laser-powered disco balls lit the room.

This grand spectacle reached a fever pitch when Coyne climbed inside a clear 10-foot-diameter balloon and bounced himself onto the outstretched arms of the adoring mob, giving the illusion of being lighter than air. How he gets into a balloon and how he breathes once inside is anybody’s guess. Once he’s made a full circuit of the hall and bounced himself back onstage, the plastic sac is wadded up like so much bubble wrap and tossed aside.

A menacing instrumental interlude, vaguely reminiscent of Pink Floyd’s “Careful With That Axe Eugene,” with the stage bathed in complete darkness, was welcome relief from all the indoor fireworks. But, of course, everyone knew the giant screen would explode one final time, cranking up the strobe effects that haloed an enormous close-up of the upper half of Coyne’s face to laser eye-surgery levels.

How the Flaming Lips will top this high-wire act, who can say? Like the Grateful Dead’s appearance at the Egyptian pyramids, maybe they’ll have to limit future performance sites to all the surviving Wonders of the World. And that includes the giant gorilla last seen clinging to the top of the Empire State Building. In the Flaming Lips’ case, it’s beauty that keeps the beast alive.

To me the LIps stoped being anything to care about when Yoshimi came out. I listened to it once and gave it away. That EP is indeed one of their best efforts, as is the one with the polka-dotted toilet cover. Now they are just another branch of Cirque du Soleil with a stage full of gimmicks, sadly. Glad to hear they still play some of the classics. And, I wouldn’t exactly call the I Beam “tiny.” But, god I miss it. We caught SO many great bands there. Hello to Cathy where ever you are!

If you stopped at Yoshimi, then you’ve really missed out. You can’t expect a group to stay interesting without letting them grow and experiment. Talented bands get burned out over the years doing the same old thing, it’s a killer. I’ve heard their entire catalog and each album has something different to offer. As one fan to another I suggest you check out at war with the mystics and embryonic for a taste of loud crashy roots from albums past! I’m sorry that you feel they have to rely on gimmicks because that is not what I saw in this show. It was all about the music! The confetti, the lasers, and animations are coupled carefully with the individual songs which help create a beautiful and surreal atmosphere. I went for the love of the band and their music and got way more than I expected. It was the best concert experience I have ever witnessed in my entire life. You really should head out with a buddy to see their next show for the hell of it, putting all preconceptions aside. I promise you you wont regret it 🙂