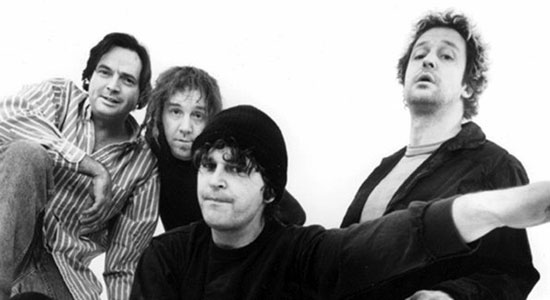 A distinct demographic filled San Francisco’s run-down Warfield Theatre for the return of the classic, early-’90s lineup of Guided By Voices. Long before the music started, people all around me were talking about the band’s guiding light, Bob Pollard, as though they had a personal connection to the Dayton, Ohio, native and what he’s been doing since he broke up the band in 2004. They were citing obscure examples to each other of Pollard’s voluminous output over the past 30 years and how to acquire rare material available only as downloads or inserts in Swedish magazines.

It almost felt like I was an onlooker back at one of those record-swap, collectors-only gatherings of overweight, middle-aged guys with pony tails bending over hundreds of orange crates full of vinyl albums until their butt cracks were exposed in an unsightly manner. You could see some of them tonight, struggling to fit into the Warfield’s ancient, pre-stadium-style seating. But there were also entire families—moms, dads and their fully grown children—ecstatically bouncing up and down to the kinetically addictive melodies of Guided By Voices.

When Times New Viking, an accomplished-yet-nervous three-piece from Columbus, Ohio, took the stage to run through its set list as fast as it could—hardly any breaks between songs—to polite applause of a few dozen or so, the bans seemed grateful that only one rude guy had hurled an insult their way. “Keep it short and sweet: Nobody wants to see you,” bellowed some lout with an English accent from the balcony, except the trio drowned out the “see you” part with an ultra-quick start-up. Fortunately, they’ve improved the Warfield’s PA since a disastrous 2007 Stooges show where the only audible elements were the bass and the kick drum: no vocals, no guitar.

The excited multitude chanted “GBV” on at least three occasions and still no action. Finally, a professorial voice from some obscure instructional LP began to drone on about how to do something or other in measured tones as the stage lights dimmed to a street lamp-lit, film-noir level—and their heroes bounced out onto the stage. A fit-looking Pollard did pirouettes and pointed one leg at the ceiling like a gymnast warming up for a big meet. Legs akimbo, baggy-panted bassist Greg Demos practiced his Buck Dharma/Blue Öyster Cult rock-star moves and Chuck Berry duck walk, while twin-anchor guitarists Tobin Sprout on the left and Mitch Mitchell on the right tuned up as drummer Kevin Fennell fiddled with his cymbals.

“Hi, Frisco,” shouted Pollard as the crowd went nuts. There were very few here tonight old enough to remember late San Francisco Chronicle columnist Herb Caen who loathed the term “Frisco.” For some reason, Pollard announced a song in a Rodney Dangerfield/Jackie Leonard vaudeville comedian’s voice. “Hold on, I’ve got to catch my breath,” Pollard said after another number. “I’ve had this problem before, where I’d play one show and the next day I couldn’t talk. I’ve gotta learn how to sing from the diaphragm, somebody told me.” The obvious birth-control double entendre—Old Bob singing into somebody’s diaphragm—was not lost upon the crowd.

Pollard, who must have written more music than anyone since Italian baroque master Antonio Vivaldi (a man who frequently penned two concertos over lunch), is the undeniable world champion of the three-minute pop song. Yet something seemed slightly off during the first half hour of the set, probably more to do with the band’s lack of rehearsal than anything else. The songs were going by too fast, the tempos seemed rushed. Nothing was sticking to the wall.

It took a few selections by Sprout, Pollard’s able musical foil, to get everything back on track. “Now here’s something by Toby Sprout and his gang of merry men,” announced Pollard as he faded into the background. A tall, gangly dude standing next to me started flailing away at ill-advised air guitar until his left elbow shot out and knocked the ballpoint pen out of my hand and over the lip of the balcony. Hopefully, no one below was looking up as the 79-cent missile hurtled downward. Sprout’s voice, distinctly lower than Pollard’s, is well suited for his minor-key-tinged songs that seem more Simon & Garfunkel folk rock than Pollard’s all-over-the-map, intensely garage/psych/power-pop numbers. By the time self-described “Uncle Bob, old avuncular Bob” had taken control of the tiller again, his caffeinated, angular songs seemed just like the good old days, leaping off the pages and grabbing you by the throat.

The plan tonight was for GBV to mostly play material from four of their best albums, cut by this crew: Propeller, Bee Thousand, Alien Lanes and Under The Bushes Under The Stars. But some of the material from lesser-known EPs like Clown Prince Of The Menthol Trailer also made the cut tonight. It was the most exciting evening with Guided By Voices I’d ever spent. No one got too bombed to stand up. The music, once it reached cruising speed, was unforgettable.

“I used to be a school teacher,” said an almost-confessional Pollard during a rare lull in the proceedings, as though we were all sitting around the fire while snow fell outside, downing a few brews. “I’d tell kids to follow their dreams and drink a lot. No, not really,” he tried, too late, to backtrack. Pollard now seems to be the indie-rock poster boy for taking his own advice. Since abandoning the “chalk brigade,” he’s had a few beers along the way and created an entire musical universe out of thin air. People love this music more than Pollard ever would have imagined back in the struggling, early lo-fi days of his band. To be in the presence of the same men who forged this wonderful material, playing it as well as they ever did, is not only a distinct pleasure, it’s almost an honor.

[…] “To be in the presence of the same men who forged this wonderful material, playing it as well as they ever did, is not only a distinct pleasure, it’s almost an honor.“Magnet […]