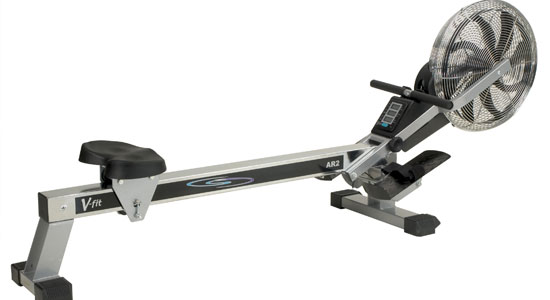 Numan: Exercise is shit. I have now lived past the age where stopping eating for 10 minutes was all I needed to do to shed 10 pounds and look like a young warrior setting out on a weekend of rampage and mayhem, with perhaps a smattering of pillaging for good measure. I can now stop eating for 10 months and all I shed is the will to live. And so, I have given in to the Lord of Pain: exercise. For 50 years I considered that simply getting out of bed in the morning was all the exercise a normal man should need. And, to be fair, I got away with that fairly well. I sailed through my various medical checks without a worry and had no problems touring, often playing 10 or more shows back to back. But, over the last two years, I’ve fallen apart. Recently I bought some machinery to help fix all that. A treadmill, a rower, a cross trainer and a weights multi-gym. All new and strangely exciting they seemed to me, as they were unpacked and moved into a small shed in my garden that I laughingly refer to as a gym (my delusions of grandeur know no limits), until I started to use them, that is. Then it became obvious to me that if Hitler had used these machines on his prisoners he would have known the names and address of every soldier landing on the beaches on D-Day. If the Spanish Inquisition had ever had access to a treadmill then burning people at the stake or pushing a large pointy stick up a person’s bottom would have seemed like the easy option. They are evil. Made by evil people and sold by their little evil minions.

I want to die, on a daily basis. I do not feel fitter, I do not look fitter. I look like death warmed up for breakfast. My heart will, sooner rather than later I’m sure, finally rip itself free of my chest and, like an alien child, it will run across the floor and out of the room, sure in its belief that I am trying to kill it. My lungs are now permanently on fire. I cannot drink fast enough to replace the water that is leaving my body and so I am slowly turning into a desert bleached carcass. My eyes are constantly blurred. Can this really be good for me?

Do not put a picture of a muscle-bound Adonis on my machinery. It does not inspire me; it makes my suffering worse. It increases the agony. My life has narrowed down to watching a small electronic timer tick the minutes of my existence away. I hate it. Come to me, oh death; I can live like this no longer.

Gary I know exactly how you feel with exercise, but sometimes it has to be done, and I did say sometimes. good luck with the tours, hope it all goes well. come back fighting fit for the December tour.

NO. Throw away the equipment. Try swimming. It is THE easiest and most relaxing way to train! And you don’t sit in your own sweat! You don’t even know that your sweating! Good luck with the voice. Any chance of a South African tour? 🙂