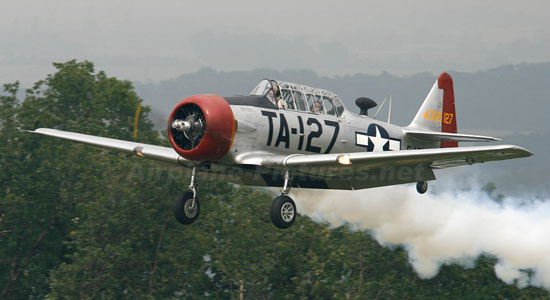 Numan: I love airplanes. I have my entire life. Until quite recently I was an aerobatic display pilot. I would loop and roll around the sky, either as part of a team or solo, at air displays all over Europe. For a while I was an air display pilot evaluator, one of the people who check that new people coming into the airshow scene were the “right” kind of people. Competent, safe, good fliers with sound judgment. I used to train people on occasions, but Christ, that was dangerous, so I only did that when I absolutely had to. Mainly, I flew World War II military aeroplanes, the Harvard (or T-6), being my main machine and the type that I owned for many years.

When I first got involved it was quite difficult. Being a musician I had the “wrong” background. Most airshow pilots, in the U.K. anyway, are either military or ex-military. There is a very good reason for that: training, skill, professionalism, etc. As a musician I was treated with a great deal of caution and scepticism. To put it kindly they were waiting for me to crash and either die or walk away and try something less dangerous. But to me it was a very serious thing, a genuine love combined with a desire to excel and prove myself. It took some time but I got there. What I didn’t expect was the rate of attrition. The first team I joined had six pilots. A few years later only two of us were still alive. The man who taught me my low-level aerobatics was killed in a particularly nasty crash. I was part of another formation aerobatic team and my teammate in that team was killed, not when flying with me, in a separate crash.

What started out as an amazing experience, being part of a small and elite group of people, something that has had a great deal to do with shaping the man that I have become, eventually became something sad and depressing. What at first was simply the nature of the beastâ€”people died from time to timeâ€”turned into a deeply soul searching quest for meaning. Too many good people, all doing something they loved admittedly, but look at the cost. I do not have a single picture, of the hundreds that were taken, where all the people pictured with me are still alive. This is a sobering thought when you consider that, for most people, display flying is actually a hobby, not a profession.

Then, as the children started to come along and my life changed, I had to admit that it all seemed a bit too reckless. I began to think that it was more a matter of when I died, not if I died. Most telling of all, I noticed that I had started to hope that I had got a manoeuvre right at a critical moment, whereas before I always knew, absolutely knew, that I had it right. When you lose that certainty of your own ability, it’s time to get out. But, in truth, I miss it greatly. Nothing is as exciting as being upside down, close to the ground, the engine screaming and your face and body being distorted and squashed by G. Nothing else that I have ever done even comes close.