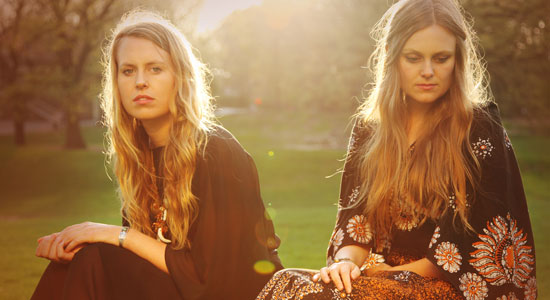 It’s no real surprise that the Chapin Sisters—Abigail and Lily—ended up playing music professionally. They come from a impressive family of musicians, including their father (Grammy-winning singer/songwriter Tom Chapin), uncle (late singer/songwriter Harry “Cat’s In The Cradle” Chapin) and grandfather (late jazz drummer Jim Chapin). In 2008, Abigail and Lily, along with half-sister Jessica Craven (daughter of horror director Wes Craven), released their debut, Lake Bottom LP, which came on the heels of the success the trio garnered with their cover of Britney Spears’ “Toxic.” Late last year, Craven left the band to care for her newborn daughter, so Abigail and Lily continued on as a duo, touring this summer as members of She & Him and, more importantly, recording their second Chapin Sisters album. Two (Lake Bottom) was cut at a family farm in New Jersey by Abigail and Lily with co-producers Jesse Lee (Gang Gang Dance) and Louie Stephens (Rooney), and it adds layers of electric guitars, keyboards, percussion and more to the duo’s patented acoustic, vocal-harmony-driven sound. The duo is currently in the middle of a U.S. tour supporting Two. The Chapin Sisters will also be guest editing magnetmagazine.com all week.

MAGNET: You guys come from quite the show-biz family. Did you know right away that you would follow in those footsteps?
The Chapin Sisters: Not at all. We both have had many other life ambitions and career path ideas, but we’ve both always loved music.

How did music fit into your family life as you were growing up?
We took piano lessons from first grade on and were both in the orchestra in high school. Our family sang a lot of Christmas carols around the holidays, and our dad has a lot of instruments all around the house. We also had access to our parents’ record collection and, obviously, MTV/radio, etc.

You were born in Brooklyn. How does the Brooklyn of your childhood resemble the Brooklyn of today?
We lived in DUMBO, which was still nameless, an annex of Brooklyn Heights at the time. Now that they’re renovating the park down there, that neighborhood is almost unrecognizable but getting lovelier all the time. Brooklyn still feels like home. We have a ton of family and friends there.

Do you credit your musical and vocal prowess more to your family upbringing or your training via school or lessons?
Everything that we’ve done in life has impacted our music and songwriting, from our family and school to friends, jobs, movies, books, everything.

Jessica left the band to care for her newborn child. Will she eventually rejoin, or are you going forward as a duo?
Maybe when our niece Myra Jean goes to college Jess will rejoin us on the road, but until she does, we’ll go on as a duo. She’s obviously our full-time sister and now just a part-time band member.

How did you hook up with She & Him? Will you continue to perform with them in the future?
Hopefully! Their album cycle for Volume Two that we’ve been touring on is drawing to a close, but we always love to play with them.

A lot of bands seem to operate as sort of islands, but you seem to really like collaborating with others. Where does that come from, and what do you think you get out of it?
Just like listening to lots of music is stimulating creatively, working with other musicians has broadened our approach to songwriting and performing immensely. It’s often just something that happens when a lot of your friends happen to play music and when you end up touring with other people.

You recorded the new album on a family farm in Jersey. What was that experience like? How did it contribute to the differences between Two and the first album?
Two was recorded out in the woods in an atmosphere of tall trees, grass, a long country road, a few farmhouses, a lake and lots of wild animal noises: crickets, tree frogs, deer, an occasional wolf/coyote. We created our own studio there in the house with our own and borrowed equipment. We set up in an upstairs room in the house and let the process unfold without any particular expectations of what would happen, letting the songs come to life however they wanted to with our collaborators, Jesse Lee and Louie Stephens. The previous record, Lake Bottom LP, was recorded in a recording studio in L.A. with producer Thom Monahan and co-producer Mike Daley. Most of those songs had already been arranged and worked out live—songs we had been performing for a while. Both processes were interesting and both are great ways to work, but very different outcomes and different approaches.

You have a long history of covering songs that initially wouldn’t seem to work in the acoustic-duo format. Do you have a list of other songs you want to cover?
No, we usually work them out as soon as we decide we want to, so there’s more of a backlog of our own original songs that we need to record and arrange than covers. There are countless amazing songs that would be fun and challenging and stimulating to learn and play, so when the fever strikes us we will.

I read you guys are friends with Harper Simon. Is there some kind of secret club for second-generation performers that we civilians are missing out on because our parents had boring normal jobs?
Yes. There is also a secret handshake.

Your music could often be described as spooky. You are related to Wes Craven. Your half-brother co-wrote The Hills Have Eyes 2. Should we be scared of you guys?
Yes. We are also related to Dracula.

We’ve all heard the stories of fights between siblings in bands like the Kinks and Oasis. Do you have any good stories about drunken backstage punch-ups? If not, care to make some up?
There was one time that Abigail ate all the pizza and Lily had to take her out. The show got cancelled due to a broken nose.