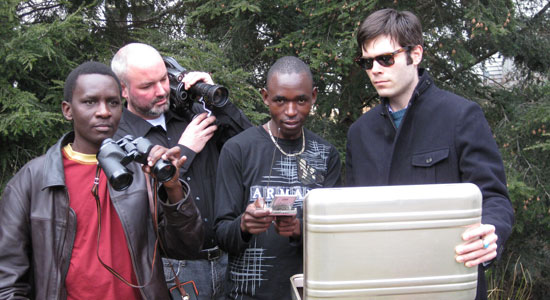 Noble: There are lots of wonderful albums in the world, new and old. And picking a small handful (to share this week) is actually kind of tough. I’m often amazed at how diverse and innovative music can be. Despite the media overload we often live in, pure expression can still manage to cut through the noise. So, of any band I can think of that has brought joy with every spin … At the top of the list is Extra Golden. This multi-national collaboration fuses a D.C. punk-rock (and psych-rock?) sensibility with Kenyan benga (including members of the Orchestra Extra Solar Africa). While the biography of this band is fascinating (even inspirational, not to get too misty), the songs alone say so much about what is possible when music is approached with an open mind. Their entire discography is filled with lively, inventive playing and writing, and their most recent album, Thank You Very Quickly, is a fine example. My wife Kristin and I share lots of records, and honestly, their 2006 debut, Ok-Oyot System, was really the soundtrack to our lives for quite a while. We were helping out with a street fair in our neighborhood, and I got to play DJ for most of the day. Of course, we rocked Extra Golden. I can’t think of many records that would have made the day more beautiful. Not sure anyone noticed this music was a thrilling example of cross-cultural harmony and experimentation. They just thought it jammed. Did I mention the record has awesome bass? And the drums sound super great? Did I say the lyrics manage to include tough political ideas and yet come across as a total celebration? They also wrote a song of thanks to (then presidential hopeful) Barack Obama, who helped them with travel visas to tour in the U.S. To catch Extra Golden live is a real treat. We’ve seen them twice, and despite their personal challenges (and the tragic loss of one of their core band members to liver failure), the band was incredibly upbeat and made the crowd totally lose their reservations. Few bands capture the feeling of sunlight on water or really make people dance. Extra Golden, thank you. (A big shout to Stylus, Exclaim!, Thrill Jockey Records and NPR for providing information on the band.) Suggested Tracks: “Ilando Gima Onge” and “Obama (Live On NPR)”