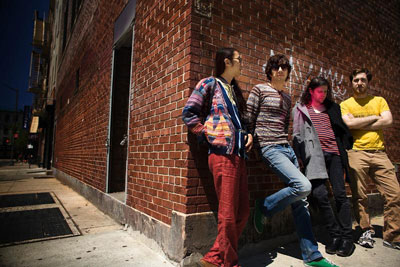 Ariel Pink’s Haunted Graffiti just wrapped up a tour supporting psychedelic-freakout forebears the Flaming Lips but has already embarked upon another psylocybin-fueled slumber party with Tropicalia demigods Os Mutantes. In celebration of both that tour and “Round And Round,” from Before Today (4AD), inevitably being named the hottest single of 2010, U.K. producer Little Loud has put out a remix of the tune. Emphasizing the feel-good synth-pop vibe of the track (as opposed to the funky, acid-fried “Thriller” send-up lurking at the forefront of the original production), Little Loud has reconfigured the song to be less idiosyncratic in its reappraisal of unfairly dismissed AM pop and more straightforwardly danceable. As if Alphaville and Delorean recorded a sunny homage to slow dances spent tear-stained in puffy lace dresses inside the musty gymnasiums of gleefully maudlin, mid-’80s prom nights. Even at his most accessible, Pink elicits reactions of skepticism and intrigue, but the only thing Little Loud looks to be relaying is that dancing is fun—especially when it’s to the hummable and weird songwriting of Ariel Pink. Judd Nelson jumps up with one fist in the air; hold for effect and fade out.