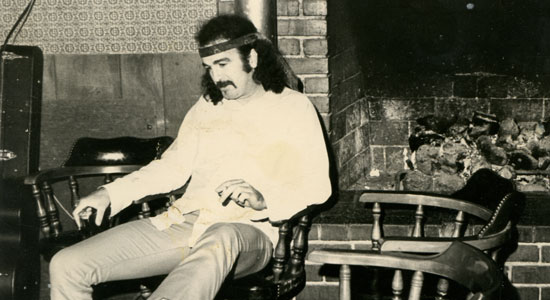 Maas: I’ve been listening a lot to an obscure singer named Jim Sullivan, who made a brilliant album called U.F.O. in 1969. The record has this dark haunting vibe that reminds me of the David Axelrod-produced era of the Electric Prunes mixed with the melancholy folk/rock of Fred Neil or Gene Clark of the Byrds. The band on the album is the Wrecking Crew, the Los Angeles session players who backed up everyone from the Beach Boys to Phil Spector’s Wall of Sound. Like so many good records, it sunk without a trace as if it never even came out. After cutting the album, Jim had a small part in Dennis Hopper’s film Easy Rider, then mysteriously vanished in New Mexico, never to be heard from again. The theory is that he was probably murdered for being a long-haired hippie in small town America, like Billy and Captain America in Easy Rider. Wrong place, wrong time. There are a number of lyrics on the record that point to his strange disappearance, as if there’s some foreshadowing going on. I recently met Jim’s son Chris, who came to our show in Solana Beach, Calif., when we were touring with Black Mountain.

One reply on “The Black Angels’ Alex Maas Is A True Believer: Jim Sullivan’s “U.F.O.””