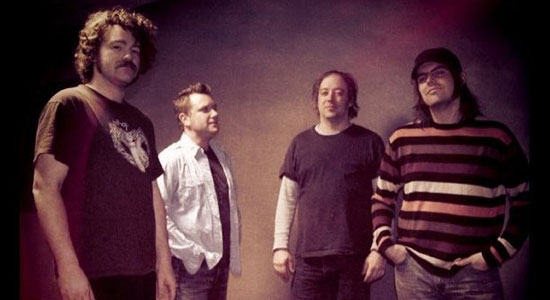 If practice makes perfect, then Raleigh, N.C., quartet the Static Minds are a well-oiled machine of rock ‘n’ roll. Collectively, the members of the band have played (or currently play) in at least 10 other projects, coming together with their perfectly honed skills for loud, power-chord-driven garage rock and high-energy live performances. Debut album Electricity is available now on Custom Made Music. Check out the cool mix tape the Static Minds—vocalist/guitarist Erik Sugg, bassist Lucius Cyrus, drummer Joel Lindelof and guitarist Andy Kerr—made for MAGNET.

Comets On Fire “The Way Down”
Erik: A bunch of California kids who sound like the Stooges, Blue Cheer and Hawkwind thrown into a veg-o-matic. Every time I slide my tongue across my chipped teeth, I think fondly of the night these guys rocked me into a stupor at Kings in Raleigh during their Blue Cathedral tour. A total blast of outta-control, psychotropic raw power. I can’t get enough of them. Video

Guided By Voices “Echos Myron”
Lucius: This is a great upbeat pop song. Lo-fi, homemade charm carries this song through to its killer chorus. Video

Bo Diddley “Bo Diddley”
Joel: Where do I start? Just look at the Duchess and the girls. They are practically having sex with you through the screen, undulating and just begging you to come closer. Bo Diddley, who seems to take a backseat to his dancers at first, starts out calm enough and slowly builds up the crowd as they barely keep on beat, clapping and stomping their feet, leading up to Bo’s slithering juba dance. Then, with military precision, it ends (with an amazing wrong note) and makes me want more. Bo, you tease. Video

Led Zeppelin “We’re Gonna Groove”
Andy: Jimmy Page was my first guitar hero. I would listen to my mom’s Zeppelin records at home alone and get scared. Blues rock in the grand tradition of signing pacts with Satan. Video

Lee Hazlewood “My Autumn’s Done Come“
Erik: Listening to Lee Hazlewood, for me, is kind of like reading a book or watching an old Technicolor movie. His deep, silky voice conjures all kinds of imagery of dusty highways and dirty bars. When Lee sings, you can’t help but get sucked into his soul-searching journeys into foreign cities with mini-skirted women everywhere he turns—encounters that generally seem to end in loneliness and despair for him. But with Lee, it’s definitely the freedom of the moment that counts, and that’s the freedom you feel when you hear him sing. Video

Descendents “My Age”
Joel: I first heard this record at a friend’s house in 1987, after a day of skateboarding and eating BK Chicken Tenders. After getting big into metal and hardcore around this time, this record really spoke to me with songs about girl problems, confusion about drugs and alcohol, school suckage, bullies, puberty, parents, etc. Even though these were love songs, they didn’t sound like love songs. There was a sense of humor and sarcasm here that has stuck with me until this very day. I chose the opening track because it sets the tone for the rest of the record. “Almost ready, almost there/Or is it already over?” Video

The Fabulous Peps “With These Eyes“
Erik: A classic high-energy, Motor City deep cut firmly embraced by Northern Soul DJs all around the world. It’s impossible for me to choose a favorite soul song, but this one has pretty much everything that I love about a good soul shaker. Killer production, a driving beat and solid groove, and spot-on vocal harmonies. I also really dig the minor-key pre-chorus. Hits the mark for me every time. I am guaranteed to tip any DJ who spins this bad boy. Video

Black Flag “Nervous Breakdown“
Erik: Hands down, the best punk-rock song of all time. During this era of the Flag, Greg’s guitar tone sounded like James Williamson on meth. As soon as you hear that intro, it’s all over. Every time I hear this one it’s like being 14 years old all over again. It’s one of those songs where it’s impossible to not have it light your world on fire and make you jump out of your skin. If this was the only song Black Flag ever recorded, I would consider them legendary for this track alone. Video