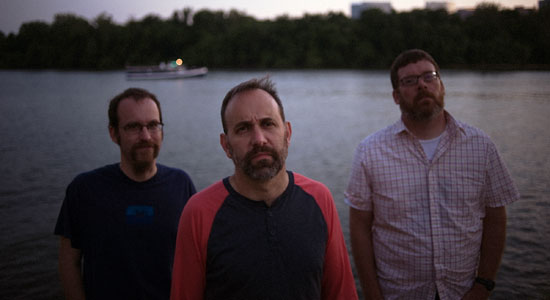 Those of you reading this while trudging through your nine-to-five, let Matthew Byars, Michael Kentoff and Dave Jones give you some hope. They have day jobs as a lawyer, librarian and an English teacher, respectively, but they live double lives as D.C.-based avant-pop trio the Caribbean. Their fifth full-length, Discontinued Perfume (out February 22 via Hometapes), will speak to people trying to claw their way out of the routine of their “grown-up lives.” And just like the rest of us, the members of the Caribbean often turn to their favorite bands and artists for an escape. Here are a few of them on this mix tape the guys made for MAGNET.

Carole King “It’s Too Late”
Michael: A Caribbean building block. This was one of the first songs I heard as a kid that made me see that songwriting was a kind of sweet sorcery that could abduct the listener into a world of mood and emotion. A song could fill the margins behind your eyes, take you for an exhilarating spin and drop you off on the corner sad, happy and out of breath. That I felt such a way about this song at a time in my life when Led Zeppelin, Kiss and Aerosmith held the most sway for me is particularly notable. To me anyway. Video

Dire Straits “News”
Matt: Thanks to Michael just posting this on Facebook, I’ve been revisiting Communique, one of my fave records by Dire Straits—or by anyone else for that matter. I struggle to find the best way to explain what I love about it, because it’s hard to bring together all the various elements and sort them out. Nostalgia certainly plays a role, as my college friend Nat Elliott comes to mind and his love of this band and album. I was too punk rock at the point he played this for me to allow myself to admit that I liked it, but I found a way to do so by some creative revisionist history regarding this being the band in its purest element—pre-Brothers In Arms bloat—that I concocted to allow myself to keep it within the narrow aesthetic bounds I’d established for my musical tastes. When I listen to it now, I hear a band in total control of its craft, an innate sense of subtlety and dynamics and great songs sung by a gifted guitarist and lyricist who, even when you have no idea what he’s talking about, you know exactly what he’s talking about. Personal, empathetic and even compassionate, “News” is one of the many high points of this record, and it takes place in the usually weak track two spot, even. Video

The Who “Sparks (Live at Woodstock)”
Dave: What rock music sounds like in my head. Video

The Go Betweens “Bye Bye Pride”
Michael: The day after Grant McLennan died in 2006, I listened to this song on my way home from work and actually cried during the beautiful chorus. Ask anyone: I’m not a crier. I guess I realized the suddenness and enormity of the loss and the way the Go Betweens (both McLennan and Robert Forster) spoke intimacies, shared inside stuff and made friends with this listener through really catchy songs—something, I think, we aspire to. Inspirational lyric: “When a woman learns to walk/She’s not dependent anymore/A line from her letter May 24.” It doesn’t get better than that. If it does, I’m unprepared for it. Video

Tycho “Dictaphone’s Lament”
Matt: Don’t know why I hadn’t heard of Tycho before, because this is just the kind of downtempo stuff I dig, but it took hearing him as bumper music on Adult Swim late one night last summer while watching King Of The Hill for me to discover him. The rest of my family was asleep and I’d just had a late-night run, and lying on the living room floor in the dark, cooling down, this captured whatever was in the air at that particular moment. Subsequently, it’s proven to be great for just about any moment, and the entire expansion and reissue by Ghostly International is gorgeous, perfect for background or foreground listens. Video

Quarteto Novo “Mitsurada”
Dave: Much like this woman, my wife and I recently spent a week in Brazil. One of the most rewarding aspects of the trip took place before we even left D.C. as I immersed myself in Brazilian music. I bought a lot of CDs, having, despite what they say, great luck judging them by their covers. One very hip cover graced a record by Quarteto Novo, and their music certainly matched; it is very hip. “Algodão” is my favorite track on the record, but this vid for a number called “Mitsurada” takes you on a helicopter tour of Rio, so let’s go with that one. Video

Thelonious Monk “Crepuscule With Nellie”
Michael: In around three minutes, an older, past-his-prime Monk demonstrates how artistic genius can incorporate disparate cultural, historical and musical elements and create a machine of awkward elegance. Like so many of Monk’s songs, “Crepuscule With Nellie” (named for his wife) challenges the listener with a jarring, elusive structure; sometimes it sounds like Monk, who simultaneously seems to disregard time and yet swing, is making it up on the spot. The listener is so charmed, however, he or she may not even notice an indoctrination into the experimental realm. Only the greatest manage to provide nourishment and make it taste like ice cream. Video

Hamlet Gonashvili “Gogov Shavtvalav”
Matt: I heard of this apparently very famous folk singer—beloved in his home country of Georgia during the era of Soviet occupation—via labelmates Shannon Fields of Stars Like Fleas and Brad Laner, the latter of whom posted it on the always compelling Dangerous Minds blog. Hushed and lovely, yet highly nuanced and disciplined, it eludes the traditional binary of music either being “happy” or “sad”; it’s both simultaneously or, even better, somewhere perfectly in between. Video

Palast der Republik “In Memoriam”
Dave: YouTube’s not all rock videos, girls and cups. There are scads of fascinating historical videos, too. This East German clip celebrates 10 years of the Palast der Republik (Palace of the Republic), now sadly demolished. For those who suffer from occasional bouts of Ostalgie, YouTube can be just the balm. Video

Robert Wyatt “Sea Song”
Michael: Although I’ve since learned that Wyatt wrote and arranged this song before he drunkenly fell out of a Maida Vale window and became a paraplegic, this, the first Wyatt song I ever heard, always seemed to me a response to his situation. I was 16 when I first bought Rock Bottom and have consistently believed that Wyatt’s scat singing in the coda was both a heartbreaking cry of grief and an affirmation of the love and great art that would see him through an uncertain future. Not letting potentially contradictory facts interfere, I continue to believe what I believe. P.S.: Out of sheer physical necessity, Wyatt borrows Monk’s sustain-pedal abstinence. Video

3 replies on “The Caribbean Makes MAGNET A Mix Tape”

I am SO digging this… I wish you guys would write commentary on all the songs I adore so I will finally know why.

I’m in the same boat, Mo…. I never realized that THAT’s what rock music sounded like in my head.