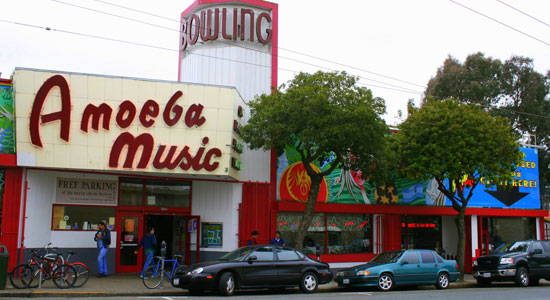 Lawrence-Brown: Whilst on the subject of “things America does brilliantly,” it would be criminal not to mention independent record stores, such as the fantastic Amoeba Records. Upon recent trips to America, I have deliberately packed my suitcase several kgs below my allotted baggage allowance to allow for the huge amount of CDs and vinyl I buy every time I hit L.A. and San Francisco. Did you know a CD in plastic casing typically weighs 100g? Therefore, if you pack your tour luggage up to the weight of 20kg, rather than the full allocation of 23Kg (on most transatlantic flights), you can be taking up to 30 CDs home with you at the end of your trip! The sheer size of Amoeba is what really makes me love it so. It is quite literally a warehouse, and that is something you do not find in London. The closest thing we have over here would be the very, very brilliant Rough Trade East (well worth a visit). But the real joy of Amoeba is the price. Practically every CD you can find in the “new” section can also be found in the “used” section for about half the price. We’re talking $3 or $4 for classic albums! I also always save up my P.D.s whilst on tour in America specifically so I can do a big raid on Amoeba when we get to the relevant cities. So much fun. A word of warning for anyone hoping to visit these stores for the first time though: Don’t you dare walk through that front door without a very well planned list of what you want to buy. By genre if possible. Because I have been there without a list before and ended up stumbling up and down the aisles for hours on end, having completely lost track of time, picking up obscure Belle And Sebastian live albums and putting them in my basket like it’s the most natural thing in the world. Don’t be that guy. Know what you actually want, and get it. Don’t think you can just browse. You’ll never make it out.