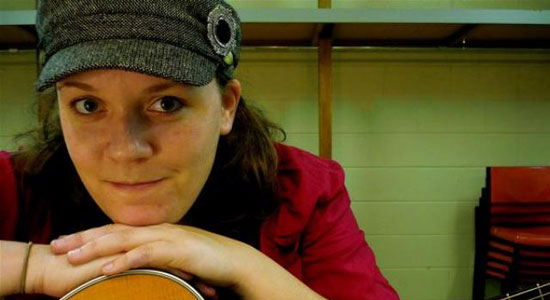 Linford: When Lucy Wainwright Roche sings, “Open season on a broken heart,” to begin the second song on her latest CD, Lucy, there is a sense of both peaceful resignation and hopeful acceptance embodied in her delivery that is remarkable. She’s not being dramatic, she’s not asking for pity, she’s not demanding that the world treat her differently; she’s just confiding the quiet truth and inviting anyone within earshot to join the conversation. “‘Cause we’re happy as we’re ever gonna be,” she goes on to sing a few tracks later on the song “October.” “Open as we’re ever gonna be, honest as we’re ever gonna be, happy as we’re ever gonna be.” And still later, “It’s not right or wrong or fair, it’s just there.” It’s almost like she’s looking around, taking stock of what’s in front of her in the present moment and embracing all of it, good and not so good, as if it were the only guaranteed gift she will ever receive. Reminds me of a bit of Zen wisdom I once heard: Take care of the moment in front of you, and you will take care of all time.

But I shouldn’t make Lucy Wainwright Roche out to be some ponderous philosopher. She’s a songwriter with an easy instinct for a timeless melody matched perfectly to clear direct language. She often effortlessly gets her songs grounded in a particular geographic place. And in fact much of the artwork in the package consists of “travel photos” that Lucy made: a sunset over Brooklyn, dogs running on a beach, impressionistic headlights on a highway, a patchwork of Midwestern fields seen from an airplane window. Throughout her new record, Lucy gets some striking harmony vocals from her father, Loudon Wainwright III, as well as Maggie, Suzzy (her mother) and Terre Roche, Girlyman, Amy Ray, Emily Saliers, Kelly Hogan and Nora O’Connor—truly an embarrassment of riches. Lucy is also joined on an oddly endearing bonus track (Elliott Smith’s “Say Yes”) by none other than Ira Glass.

Lucy’s songs make it clear that she’s no stranger to pain. But the songs also seem to possess an intuitive resolve to reject aggression or self-pity as a reasonable response. On “Early Train,” when you hear Lucy sing, “All the plans you made are leaving on the early train,” you know it’s true. But when she sings, “My love is stronger than the winter you are frightened of,” well, somehow you believe that, too. We all have our ways of coping, and Lucy seems to value conversation, laughter and relationships first and foremost. If you’re like me, this record will sneak up on you, and before you know it, some dark evening you’ll find yourself wrapped in the arms of these songs. It says a lot for the writing, when a beautiful cover of Paul Simon’s “America” seamlessly appears to bring the record to a close.