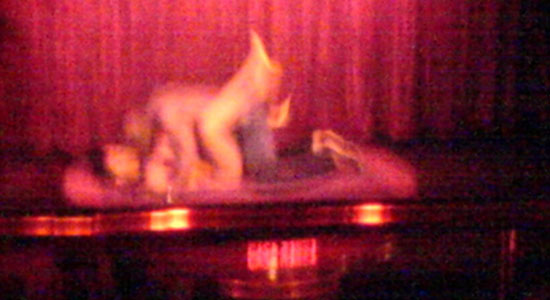 Cockburn: So there we are, standing on the cobblestones, looking at a building with a big pink elephant sign: LIVE SEX. My companion says, “Let’s go in!” Curiosity rules! We trade some cash for a hand stamp with a friendly fellow who informs us that the show is 90 minutes long and we’ll see “all positions.” Up the dark stairs and through a curtain. We’re in a smallish room with 100 or so theatre seats facing a well-lit stage on which stands a heart-shaped bed draped in red silk-like material.

The show is in three “acts,” with intermissions featuring a sort of comedy striptease in which an attractive young woman takes off part of her already-skimpy costume and invites three tittering college boys up to perform with her. One of them has to eat a banana from between her legs? Breasts? Funny, I can’t remember …

In each of the main acts, a woman wearing a thong comes onstage, which is now a bedroom. She appears to be idle, perhaps pining for someone or something. A stocky, swarthy and hirsute man enters stage right. He too wears a thong, with rather more of a bulge. They kiss in a perfunctory way, like an old married couple. Then, as they recline onto the bed, she removes his thong and goes down on him. The red-draped, heart-shaped bed begins to slowly revolve. Chill disco music plays. There is caressing and a display of something like tenderness. The man enters the woman from one of several possible directions. This is followed by rhythmic movements. Change angle of approach. Further rhythmic activity. After all the positions have been tried, they stop. There is no evidence of a climax, although the woman tosses her head and makes moaning noises. The bed ceases to revolve. We all applaud as the couple holds hands and takes a bow.

Each act involves a different couple. Each couple has its particular routine. All is carried out in a sedate, deliberate manner, which is so mechanistic as to seem quite innocent. We’re like aliens watching a display of the mating practices of earthlings. Not in the least sexy, but interesting.