For almost 25 years, John Andrew Fredrick and a revolving cast of characters have been issuing records as the Black Watch. The California-based indie-rock institution is back with 11th album Led Zeppelin Five (Powertool), and it’s the first LP to feature the rock-solid lineup of Fredrick, guitarist Steven Schayer (ex-Chills), bassist Chris Rackford and drummer Rick Woodard. When Fredrick isn’t busy writing and recording songs, he’s teaching English at the University of California, so we thought he’d a be a natural choice to guest edit the MAGNET website. Fredrick, with some assistance from Schayer, will be doing exactly that all week. Read our brand new Q&A with Fredrick. 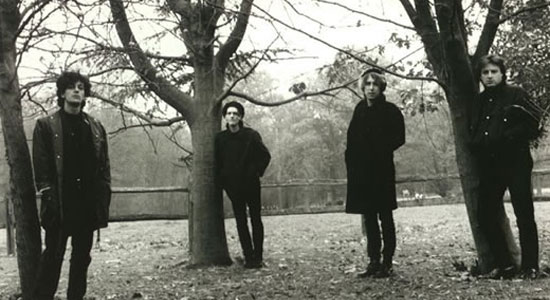 Fredrick: In 1986 or so, I heard the eponymous track from the Lucy Show‘s …Undone on the radio in Santa Barbara—just a Tantalus of a snippet to promote a local show for this London-by-way-of-Canada band—and I got that same tingling I remember getting the first time the Beatles’ “I Want To Hold Your Hand” came clarioning over the AM radio in my mom’s big, black, bulbous Buick. I wanted to jump up and down like a toddler on taffy. I think the Beatles parallel, if admittedly a bit grandiose, is apt in that the Lucy Show’s debut harbors those things—jangly arpeggios tempered by dark, Easternish drones; co-vocalists (not forgetting good old George, OK Fabs geeks?) who sound similar but who remain satisfyingly, distinctly identifiable; preposterously catchy choruses and hooks—that the (to me, at least) Ur-band from Liverpool did first, best and, of course, indelibly. The Lucies also reminded me of my two favorite bands at the time: the Cure and Echo & The Bunnymen. Yes, I had the obligatory post-punk, tweedy, threadbare greatcoats and wore them sweatily round SB in the semi-sweltering summers, suffering for my nascent art—the band I didn’t yet know but somehow sensed I was to become.

This record, thankfully re-released a couple of years ago on CD by Words On Music, really is the sine qua non of the Black Watch. After having seen the Lucies play to all of seven people, I went out and made up the first incarnation of TBW the very next day with a joe-college drummer on the crew team at UCSB (where I was teaching), a Chickasaw sweetheart 10th-year senior called Kenny who was “learning” the bass and a charming surf-star pretty-boy/math major/reconstituted candy-metal guitarist named Dave Dodd, who pleaded with me to call the band Dave Dodd And The Gods. “Come on, John,” I remember him saying, “you can be a god here! Or one of them at least! Don’t you realize what that means?!” Even though I, of course, wrote and sang all of the eight songs that comprised our first warbling, Dutch-courage-y sets opening for the godawfully precocious Toad The Wet Sprocket. I think he thought he was a sort of seaside Beelzebub, Dave Dodd did. Or maybe, like many of us at the time, he was doing some advanced after-school ‘shrooming. The math and geology students always seemed to have more/better drugs than us English majors. I met the Lucies’ Rob Vandeven at one of my acoustic gigs in London a couple of years ago and told him I started a band because of him. He might have said, “Sorry about that, John!” He’s a swell guy, and he put out a cool solo record, as has Mark Bandola (as Typewriter, and a couple, actually), but they need very very much to reunite. If you don’t know this record or the follow-up, Mania, rush out your door right now and have your GPS find you a record store. Ha! Luck to you.

One reply on “From The Desk Of The Black Watch’s John Andrew Fredrick: The Lucy Show’s “…Undone””

Not only it’s great to see somebody give props to the Lucy Show but the mag is shining a spotlight on The Black Watch – another great band that doesn’t get enough kudos. Nice guys all around to boot.