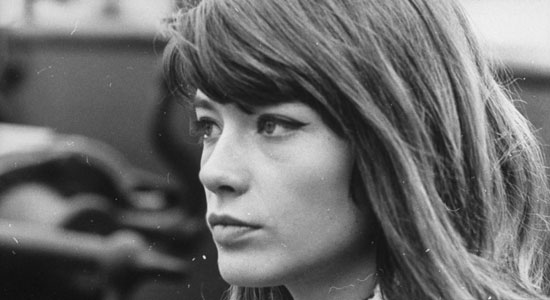 Will Sheff is the frontman of Okkervil River.

Sheff: I’ve been thinking recently about French singer Françoise Hardy and specifically thinking of an experience I had when I first heard her “All Over the World,” one of Hardy’s songs in English. It was my first exposure to Hardy, and I remember feeling that there was something vaguely silly about the song, that it was kind of lightweight. The melody and backing track were pretty enough, but they also felt kind of clunky and conventional, with Hardy’s accent awkwardly distracting from the emotional pull of a lyric that laid out a clichéd love-and-parting theme that didn’t really do much for me anyway. I kind of discounted the song, and even, at first, the singer.

About six months later, I was listening for the first time to another Hardy record and was struck by a beautiful, stately ballad. Hardy’s voice was gorgeous and whisper-quiet over an almost funereally solemn, classically derived piano arpeggio, and the lyrics, in French, seemed profoundly meaningful even though I didn’t know what they were about. I realized, when I looked at the title of the song, that it was “All Over the World”—the exact same recording, in fact, just with Hardy singing in French instead of English. Somehow, in French, the song sounded completely different. Hardy’s singing was beautiful and mellifluous, rather than gawky and tentative like in the English version. She sounded comfortable, she sounded womanly instead of girlish, and she sounded sad and wise. Her voice sounded so right, in fact, that it made everything else in the song sound different. I noticed the way her vocal melody interacted with the piano. I noticed the low end in the recording and the beautiful, deliberate pacing of the arrangement. Because I don’t understand French hardly at all, I could read any meaning I wanted into the lyrics, but they actually sounded beyond meaning, like that pretty vocal melody was the whole meaning of the song, deeper and more profound than “all over the world people must meet and part” from the English version.

This was around the time I started pre-production work on the Roky Erickson record True Love Cast Out All Evil, when I was sorting through the 60-plus songs Roky’s manager had given me to consider for inclusion on the record. There was one song on the three CDs he sent me that I loved instantly and that kept reminding me of this other song by an old blues singer named Pat Hare. I noticed that, without thinking about it too much, my production ideas for the song were being slightly influenced by my memory of Hare’s song. Then I realized, in a flash, that there was actual very little musical similarity between the two songs at all, but that they just had very similar lyrics. The similarity in the lyrics was so glaringly obvious—Roky’s song was called “Please, Judge” and Hare’s song, “I’m Gonna Murder My Baby” (which, by the way, ended up being autobiographical) began with the lines, “Good morning, judge, and the jury, too/I’ve got a few things I’d like to say to you,” and continued with Hare addressing the courtroom at length.

I felt so stupid that I had mixed up music and lyrics in my mind that I suddenly found myself wishing I couldn’t understand lyrics at all, that my mind could be wiped clean of the meaning of language and I could just appreciate it musically. Because the truth is that if you focus on lyrics too closely they can blind you to other musical elements of a song.

Brian Beattie, who has been co-producer on many Okkervil River records, takes a kind of perverse delight in informing people that he doesn’t listen to lyrics and doesn’t care about them. I always appreciated that attitude, but it wasn’t until actually working on production myself that I truly realized how vital a skill that can be. People who are too influenced by the example of Bob Dylan (who, coincidentally, briefly dated Hardy) sometimes get so impressed by lyrics they think that a great lyric can salvage a pedestrian song. It’s just not true. A song is a whole and the meaning of the song comes as much from the beat the rhythm section is pounding out, the particular dirtiness of the guitar, the sheer abstract sound of the words coming out of the singer’s mouth. The order of the syllables and the rise and breathy fall and the choke in the singer throat all mean just as much as what the actual words are telling you.

Early-on when I started doing interviews for Okkervil River, people would ask me about my all-time favorite lines from rock songs. As I started thinking more about the question, I realized I was surprised by my own answers. The truth is that a lot of the most famous work by the most celebrated lyricists just bugs me. People get too clever or start trying to show off their intelligence or their skill with wordplay, or they pile words and words and words on an uninteresting piece of music, complacently expecting their audience to stick with them because they’re a “great songwriter.” A certain kind of intellectual vanity starts to creep in, and pleasure starts to bleed away.

I started to realize that some of my all-time favorite lyrics don’t mean anything at all. The Carter Family’s signature song “Wildwood Flower” is famous for lyrics that got passed down through so many generations of performers that—like a bad game of “telephone”—they warped into nonsense, kicking off with, “Oh, I’ll twine with my mingles and waving black hair” and including one of my all-time favorite lines ever sung, “The pale and the leader and eyes look like blue.” Many of the earliest couple generations of rockers—and their disciples—were weaned on the American and English folk revival scenes, and they intuitively grasped that meaning was only about half of what made a lyric good and that, paradoxically, some of the best lyrics have an awkward inarticulate clunk to them. I’ve always deeply admired the Alex Chilton lines, “On Beale Street Green my wishes visualize/The real, so real scene/‘Twixt me and you.” Roky understands this too; I’m blown away by some of the lyrics on True Love Cast Out All Evil. My favorite might be the very last lyric on the record, the final line of “God Is Everywhere”: “Also, also thought-lost and never-known treasures/Coming back to we.”

Ultimately, I think the lyric I’m absolutely the most jealous of in all of English-language songwriting is a John Lennon line from “Strawberry Fields Forever”: the immortally awkward, “Always, no sometimes, think it’s me.” It’s a lyric that verges on utter meaninglessness, but captures what I think of as the sensual and slurred mystery of the way thoughts form themselves in your brain, crossing themselves out, doubling back, correcting and reasserting and doubting themselves and finally collapsing back again, overwhelmed, synapses firing all at once but simultaneously stripped. It also just sounds fucking great when you sing it. It sounds like a song, a song you instantly know, a song that says everything, and everyone knows exactly what it means, and no one can say.

One reply on “From The Desk Of Bird Of Youth’s Beth Wawerna: Okkervil River’s Will Sheff On Lyrics”

[…] than their lyrics themselves.  Frontman Will Sheff is one of our generation’s finest wordsmiths.  He seemed to be having a genuine good time onstage, and wore a very nice blazer.  Also, their […]