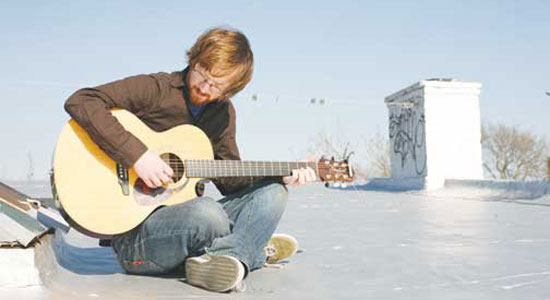 Mills: I’ve never been a big fan of “open mics.” Always thinking of myself as a “professional working musician,” even when I was actually just a pizza delivery guy who played music on the side, I thought that there was nothing to be gained by rubbing elbows with hobbyists. Or maybe these sorts of things were for novices who couldn’t get heard any other way. I toured after all! I had a label that was selling literally tens of my albums! In short, I was a judgmental asshole.

That all changed when I met Niall Connolly and was introduced to his Big City Folk movement. Niall is perhaps the hardest working musician I know and definitely one of my favorite songwriters. Often playing seven nights a week, he hosts a variety of open mics, rock shows and curated songwriter sessions for novices and pros alike. Like Pete Seeger, Woody Guthrie and Billy Bragg before him, Niall feels that music is a weapon for good that anyone can employ, and his open and supportive nature fosters an environment rooted in the best aspects of what music is about: community, equality and just plain good old times. So, thanks to Niall, the scales have fallen from my eyes. I play more. I write more. And I’ve re-learned something that I had forgotten: That there is value in the process and the attempt, that even the shakiest most unpolished voices can have something to say and that you can learn something from anyone as long as you’re willing to stop being so cynical, shut up and listen.

As a side note: Niall isn’t really just a folky. He’s actually a stunning wordsmith with an acute pop sensibility, as evidenced on his killer 2010 album, Brother, The Fight Is Fixed, and this year’s admittedly folk-ier Super Cool Fantastic. I highly recommend them both.