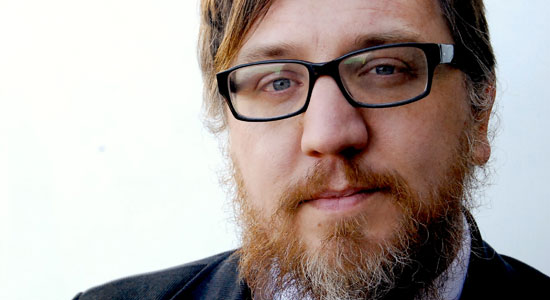 Heavy Years: 2000-2010 (Ernest Jenning) is the latest release from Brooklyn-by-way-of-Chicago singer/songwriter Chris Mills. The 14-track retrospective compiles songs from his last four albums, along with two new tracks recorded with DJ Oktopus (Dalek). Mills is currently on the road supporting Heavy Years, and he will also be guest editing magnetmagazine.com all week. We recently caught up with him via email.

MAGNET: You first came to MAGNET’s attention when you released your debut album, Every Night Fight For Your Life, on the late, great Sugar Free label in 1998. It’s hard to believe that was 13 years ago. How has the way your career has progressed since differed from how you thought it would back then?
Mills: I think I’ve gotten a lot farther than I thought I would. Back then, I just wanted to be able to get a gig somewher, anywhere. Now I’ve played hundreds of shows and traveled all over the world. I’ve made amazing friends. I’ve written more songs than I ever thought I would. I just had no idea how much I would get to see and do because of playing and writing music. I’ve been extremely lucky. Back then, music was just something I was trying out to see if I could do it, and it became this awesome adventure. It became my life.

Heavy Years: 2000-2010 is definitely a retrospective, but it doesn’t seem like you tried to do a “greatest hits” record, which I mean in a good way. How did you go about picking what would be on it? How come you didn’t include any songs from Every Night?
I wanted Heavy Years to be a survey of the last 10 years of my career, rather than just a collection of singles or something. I wanted to give people who hadn’t heard me before an idea of the range of stuff I’ve done over the years, so I mixed tracks that seem to be more popular in the live show with some of the ones that have meant the most to me over the years but maybe haven’t gotten as much attention. I left off the tracks from Every Night Fight For Your Life because I don’t really feel like I knew what I was doing back then. I started with songs from Kiss It Goodbye because that was the first album where I really felt like I knew how to write songs and how to make records. I still love the earlier stuff, but when you set it against some of the later tracks it just sounds like practice. Also, a decade is a nice round-numbered span of time for something like this.

There are two new tracks on it that you recorded with DJ Oktopus of Dalek. How did you guys hook up? Do you plan to do more with him?
The label I’m on, Ernest Jenning, does all the vinyl for Dalek. We had played a show together at SXSW but hadn’t really talked. Later that night, I saw them stranded in the middle of Sixth Street trying to hail a cab. If you’ve ever been in the middle of Sixth Street at midnight during SXSW, you know this is a ridiculous thing to attempt. I ended up giving them a ride back to their hotel out by the airport, and we laughed our asses off the whole way there. After that, we just knew we wanted to work together, so Oktopus, my band and I got together and did the bonus tracks for this project and had a blast. He’s great to work with: incredibly laid-back, very creative, fun. I’m sure we’ll get together again before too long.

You are currently working on a new album with the tentative title The Soldier Is The Castle. How is that going? When are you looking to put it out? Who are you working with on it? What else can you tell us about it?
I’m actually working on a couple of different projects. The Soldier Is The Castle is something that’s incubating at home right now. I’m trying to figure out where I’m going next with my solo stuff, and I think it’s going to be something a little darker than the last record. I’m hoping that it will be mostly story songs, because now that I’m married I’m hoping to avoid the kind of personal tragedy and heartbreak that fueled my earlier work. I’m also working on a band called Uncanny Valley with some friends in Oslo. It’s been really fun but kind of slow going because I’m not there all the time. Whatever the next thing is, I’m hoping it’ll be ready to go by next spring or so.

When did you move from Chicago to Brooklyn? What part of the borough do you live in? How do you like it?
I’ve lived in Brooklyn since 2003. I live in Clinton Hill now, and I like it a lot. That said, I still feel like Chicago is where my musical heart is most of the time. I still play and record there quite a bit, and I feel like it’s where I grew up, musically speaking. A lot of the people at the center of my musical life still live there.

Given you can’t swing an H&M bag in Brooklyn and not hit a musician, are there any there that you hang out with and play music with, etc., on a regular basis?
New York is a hard city to collaborate in because there is so much going on that it’s hard to just find the time. But the quality of musicians that you run into while you’re out running around town is pretty stellar. The guys I play the most music with are probably my buddy Niall Connolly, who I am writing a post about for MAGNET, and my arranger and piano player David Nagler (Nova Social). Niall is a really great songwriter and one of the most open musicians I know. David is someone I collaborated with for years before I moved to New York, and now I’m lucky enough to have him in my live band almost every time I play in town. He is hands down the most versatile musician I know. David can do anything.

Are you any other musicians who you are dying to work with?
There are always people I’d like to work with. I wouldn’t mind working with Nick Lowe or Dave Fridmann. I really like the Walkmen. But honestly, I love the people I’m working with now.

You released you own records there for a while. What made you work with a label again?
They approached me. The head of the label actually used to be a booker at the CMJ festival, and after not being able to find a label for The Wall To Wall Sessions, I submitted it to the festival on my own. He was already a fan of some of my earlier stuff, so when he saw it in the submissions pile, he grabbed it and emailed me to see what was going on and  if I’d be willing to release it on his label. And honestly, it was an easy decision. The guys at Ernest Jenning are awesome. They’re real music fans, and they do right by their bands. It’s the most collaborative label situation I’ve ever been in. Sugar Free was a great label, but it never really felt like we were all on the same team. With EJ, it’s different. They really just want everyone to be happy, and they’re willing to work with you to make it happen.

Beyond this current tour and working on the new album, what else do you have planned for 2011?
Finally finishing A People’s History Of The United States.

2 replies on “Q&A With Chris Mills”

Check out this Riverfront Times article and interview with Chris Mills at the link below: