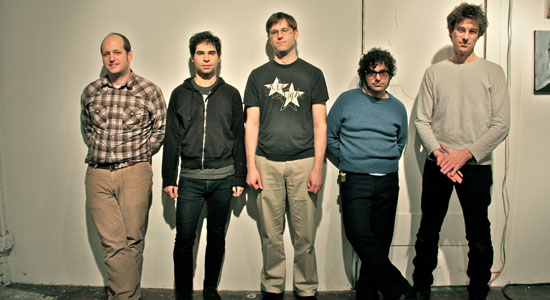 In 2008, Oneida began the Thank Your Parents triptych with Preteen Weaponry. Since, the Brooklyn band—Kid Millions, Bobby Matador, Baby Hanoi Jane, Showtime and Barry London—has completed it with 2009’s Rated O and the new Absolute II (Jagjaguwar). The quintet is touring Europe in August and is also playing the Asbury Park, N.J.-based All Tomorrow’s Parties in October. In addition, Millions (known to some as John Colpitts) will be guest editing magnetmagazine.com all week. We recently caught up with him via email.

MAGNET: Do your friends call you Kid or John?
Millions: It depends.

Absolute II is the final installment of a triptych. Can you explain how all three albums relate to each other and what they mean as a whole? Have you ever listened to all 200 minutes of it in one sitting?
Good question. I’m not sure the artist’s role is necessarily to delineate the experience and the meaning of this work. I think it would be interesting to listen closely and see what you came up with. On a very general level—and we’ve said this a lot already—the ambition of Thank Your Parents was to capture the entirety of Oneida’s creative breadth in a single work. We reference Moby Dick as a kind of artistic touchstone—not thematically obviously, but in ambition. We clearly failed, but that wasn’t the point anyway. I’ve listened to the entire 200 minute piece a few times, but there’s no one way that we expect people to experience this release.

Why did you call it Thank Your Parents?
There were a lot of reasons for this. The first one being that we thought it was probably the most uncool thing you could do in a rock context. We are always riffing titles amongst ourselves. Then once we decided on this title and how absurd it felt, we realized that in a way it was distinctly apropos. Despite the unique details of one’s personal upbringing, we all have our parents to “thank” in some way. “Thanks” can be taken in the broadest possible way in this case.

A big part of the Oneida sound has always been your drums, but the new album has no drums. Was that the intent from the beginning?
It wasn’t the intent at all. It just happened that the music we recorded during the last year or so mostly had no drums. We gathered up a number of sessions and picked the best, most interesting moments and created Absolute II. I still play the drums and still play the drums with Oneida.

Is the five-piece that recorded Absolute II what you would consider the official Oneida lineup?
Yes.

You guys will be performing a mostly improvised set continuously throughout the day at the ATP in October with some special guests? Can you tell us what you already have planned? How hard is it to play drums for hours at a time?
We don’t have anything specific planned yet. We’re going to ask most of the people who are playing during the weekend to join us and see what shakes out. Playing drums for hours at a time is probably like ultra-running competitions, but I’m not sure. It’s really hard, but it’s also well within the range of possibility.

Aside from ATP, it seems like most of your live dates are overseas. How come you guys aren’t touring in the U.S.?
We have a very limited amount of time available to dedicate toward the band. We’re busy people, and some of us have families and other responsibilities. We’d love to tour longer and hit some more places. The other cold reality is that it’s expensive to tour, and we’re maybe not the biggest draw in the world. If people want us to play in their towns, there’s clear lines of communication out there to reach us!

How has Brooklyn and its music scene changed since you guys have been living there? When did you move there?
I moved here in 1996. Things have definitely changed, but to get into the details would take a book probably. Back when I moved here in 1996, the media attention was not focused on Brooklyn like it is now. Brooklyn was not cool. I’ve said it before, but telling someone your band was from Brooklyn in 1997 was actually an ironic joke. Saying, “We’re from Brooklyn,” elicited bewildered surprise from everyone, kind of like, “Why would you bother saying that? Why not just say you’re from New York City?” There were also no places to play out here aside from the occasional party or warehouse gig, and those were not coveted slots. We saw the alternative venues as a better way to build an audience and to have fun playing music outside the normal system of commercial NYC venues. Now bands move to Brooklyn to plug into a scene that was largely created in the last 12 years or so. There are commercial music venues on every block in Williamsburg right now. There was a time in recent memory when there were none. That said, I move in pretty limited circles. I’m not really an authority on the Brooklyn music scene. It’s grown exponentially—it’s beyond my comprehension—and always was honestly. Let’s remember that Brooklyn is the largest borough in the city of New York. There are 2.6 million people living here. I’m just a dude in a band who lives in Bushwick.

What is going on with your side projects Man Forever, Soldiers Of Fortune and People Of The North? What other musicians are involved with them?
Man Forever is the vehicle for my composition ideas. There are a number of different iterations: organ/drums, large drum ensembles, guitar ensembles. There’s a new live album coming out on St. Ives in September, and I’m hoping to do a short Northeast tour around the release. Soldiers Of Fortune is a project I’ve been doing for about seven years with a bunch of heavy hitters. Last year, we had our first record released by Mexican Summer, and we’re trying to ramp things up a bit. The idea of the band is that it’s anti-band. We don’t want to schlep gear, practice or play shitty shows. We’re mostly good in that respect. I think we’re recording another album with them soon. It’s kind of like a punk Allman Brothers. People Of The North is Bobby and me from Oneida, with various guests. Shahin and Barry; it’s another Oneida project, just not always explicitly Oneida. We have a new record that will come out within the next six months called Steep Formations.

Are there any upcoming releases on your Brah label?
There’s a Japan benefit compilation based on a bunch of single sessions Shahin and I recorded last year. We recorded 21 bands at Oneida’s studio, the Ocropolis, and are releasing the results digitally ASAP. There are unique tracks by Zombi, Notekillers, Christy And Emily, Akron Family, White Hills and a ton of other amazing bands. And the People Of The North album.

What do you guys have planned for the rest of the year?
We’re finishing up a new record—hopefully this month—and have a number of large conceptual performance projects in the works. It’s still too early to talk about them, but they’re gonna be incredible.