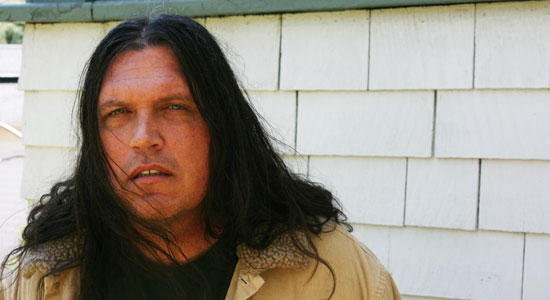 This week, singer/songwriter Richard Buckner releases Our Blood (Merge), his first new music since 2006’s Meadow. The nine-track LP was recorded by Buckner at his upstate New York home studio with pedal-steel guitarist Buddy Cage (New Riders Of The Purple Sage) and drummer Steve Shelley (Sonic Youth). Buckner kicks off a co-headlining tour with labelmate David Kilgour (the Clean) on August 16 in Los Angeles. In the meantime, Buckner will be guest editing magnetmagazine.com all week. We recently caught up with him via email.

MAGNET: I read that there’s been a five-year gap between your records due to the following reasons: a film score that fell through, a headless corpse that led to problems with the law, a broken tape machine and a stolen computer. Can you please elaborate on each?
Buckner: Usually, over the years, I’ve made a record every few years, then toured in between releases. It was my plan to release the score and then do a tour with the instrumental pieces from the film and older songs from my catalog. After the film failed to get wide distribution, I was supposed to get the master recordings back, but, of course, the producers went back on their word. This left me with no record to release and no tour to support the release. So, five years later, I have a few years’ worth of work sitting in a drawer in my desk that will probably never see the light of day.

A burned-out car with a headless corpse was found on a quarry road outside of town, not far from a place I was renting. I was questioned about it a few times: once, when they came to my house, and then a few months later, when they led me to a cylinder-block-walled basement interrogation room at the local police station. After they spent a few hours with me and took photos of me and my truck (also implicated in the crime), they let me go home. Luckily, at the time I was working at a warehouse, sitting on a forklift, with a time clock for my alibi.

During one of my visits with the police, they told me that the road where the crime was committed was a popular spot for dumping bodies, so I decided to move. I found a place closer to town and set up my studio to start working on another record. About this time, my recording machine crashed and took a few years of work with it. I had mixes and various writings for it on my laptop, so I got it repaired and started again.

The place I moved to, away from the quarry road, seemed like a calmer, nicer neighborhood, but not long after settling in, my house was robbed and they got my laptop with the mixes and writings that I was planning on using for the next record. So, I started again, but creative doubt took up where mechanical failures left off. The record had actually been attempted about four times by the time it was released.

What other musicians contributed to Our Blood? Just Buddy Cage and Steve Shelley?
Yes.

Had you played with them before?
No. I got ahold of Buddy Cage through a guy I used to know from San Francisco. The New Riders Of The Purple Sage were playing in the area, and he agreed to come over and sit in my studio for a day. I’d met Steve Shelley years before at a show we shared somewhere. He came up to my place from New Jersey in a Zipcar, and we just used various percussion instruments that I had around the house. They both played on quite a few songs, but after the various mechanical failures and song changes, they ended up on just a few.

You have collaborated with a bunch of artists over the years. Are there any you want to keep working with going forward? Or do you like to keep changing it up?
I’d work with most of them again. I do like changing it up. Sometimes, as the songs come together, I have certain people in mind for certain reasons. There are also location and budget issues that come into play.

On your website, you are very specific about what instruments you use to make specific songs. Do you think your fans are big tech heads?
No. I’m not a big tech head myself, but I like knowing things about records that I listen to.

Do you write songs thinking about what kind of instrumentation you will want to utilize when you record them?
For Our Blood, I used whatever instruments around the studio were in working order at the time. But for my next record, for example, I know that I won’t be recording it home. I’ve started writing material for the next record with a certain artist in mind who I want to work with. I don’t know him and haven’t approached him yet, but once I get most of the writing done, I’m going to court him.

You are about to start a co-headlining tour with David Kilgour. I never understood the concept of “co-headlining,” because unless both of you play at the same time, someone is opening for someone else. So who is the real headliner on this tour?
It’ll be two snakes eating their own tails, in no particular order.

As somebody who has been doing this a long time, what do you think of the current state of the music industry? Do you think an artist such as yourself is better or worse off than you were 10 or 15 years ago?
Everything is the same. I have the same truck. I make the same pay or less. I play a lot of the same clubs. The only thing that’s changed is that everything costs more, and there’s a larger culture of art terrorists who think it’s OK to give away the work of others.

What did your time on a major label teach you?
I learned that I was surrounded by parasites with vaguely fragranced decomposing agendas.

Do you still have to supplement your music career with other jobs?
Yeah. The rent is always due.

What’s a typical day for you?
When I’m not at a regular daytime job, I’m either in my home studio recording or erasing, at my writing desk scribbling and mumbling to myself or in a chair with a book and a cat on my lap. Generally, I get up early with a pot of coffee or a coffer of pot and get to work in one way or another.

Bon Iver has cited you as a big influence. Who are your influences these days, and how have they changed over the years? Who do you consider to be your peers? Where are you living these days, Brooklyn or upstate New York?
My influences are usually temporary things I stumble upon when I’m looking around. For example, I live in a cracker-assed upstate N.Y. town, and most of the yahoos living here have influenced me to never want to leave my house. My peers are any artists trying to make a living and finding the continued rip-offs and hassles tiring.

Why do you move around so much?
I grew up that way. My family moved two or three times a year for most of my childhood. Now, I stay in places a few years at a time.

I’m sure you are aware of it, but I just found out about the Richard Buckner Preservation Society. Congrats. What about you is worth preserving?
Not my liver.

You probably have no recollection of this, but we met once. You were playing the Tin Angel in Philly and, after the gig, got into an argument with the show’s promoter over some sort of payment issue. You then said something along the lines of, “This is why I hate this fucking city.” Tell the truth: Do you really hate the City Of Brotherly Love? Is that why you aren’t playing here on your tour?
The city shouldn’t take it personally. Negative experiences shape my perception of certain areas. The entire state of Florida, for example.

What do you have planned for the rest of the year?
Lock my doors and wait for the next rapture alert.