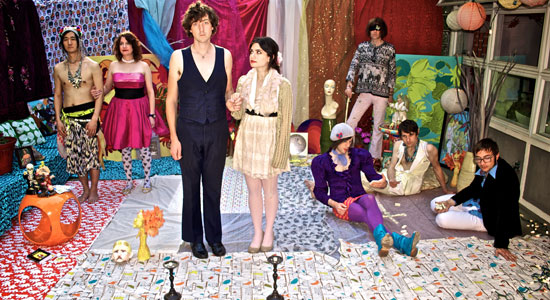 of Montreal’s music is hard to define, given it changes more often than frontman Kevin Barnes’ sequined and feathered outfits during a live show. One album might be heavy on the drum machine and synthesizer, while another showcases Barnes’ best high-pitched Prince wail with more traditional strings and percussion. The Atlanta band boasts a prodigious body of work; in a decade and a half, Barnes and Co. have churned out 10 albums, eight collections and 29 singles and EPs, including their most recent effort, thecontrollersphere (Polyvinyl). That’s not even counting their various side projects and demanding tour schedule. MAGNET recently caught up with Barnes via email, and he provided some insight into how he finds time to relax (he doesn’t) and discussed his band’s constantly evolving sound, his desire to collaborate with Sufjan Stevens and Erykah Badu, his honest opinion of commercial success and the key to artistic longevity. Barnes and of Montreal’s two art directors—wife Nina Barnes (a.k.a. geminitactics) and brother David Barnes—will be guest editing magnetmagazine.com all week.

MAGNET: Your sound has morphed dramatically from the early years of simple, quirky twee-pop to the more danceable, electronic albums like The Sunlandic Twins to the current funk-infused, turbulent False Priest. Where do you see yourself going next in terms of your artistic growth?
Barnes: I’m moving in a slightly more 21st-century modern-classical direction. Since this century is so young, I suppose it’s impossible to be anything but 21st-century modern, though I’m sure there will be an early-2000s retro movement within the next couple of years. Our nostalgia mania is moving far too quickly; soon we’ll be overtaken by it, and the world of art will become post-future. We’ll be nostalgic for something that hasn’t happened yet.

I’ve been to four of your shows, and each one keeps getting more theatrical and weirder. How do you come up with the ideas for your onstage performances? Do you sit around the table and say, “It would be really awesome if we had an actor in a nude-colored body suit with a pig mask simulating fellatio on Kevin”?
Sort of. We do have production meetings. My brother David comes up with most of the stage theatrics and prop ideas, and then we all work together to try and realize his vision. Sometimes, it can be extremely challenging. It’s a fun challenge, though.

Your outfits are wild. Do you dress like that to hit the grocery store or to see a movie?
No, I’m pretty conservative when I’m at home. I don’t like to draw attention to myself. I like to be the invisible man. I think my concept of conservative is still a little strange by most Southerners’ standards, however. I still get a lot of weird looks from people.

Many bands and artists, especially in the age of Facebook, Twitter and Lady Gaga buying McDonald’s for fans pining for her outside of her hotel room, have been building really intense relationships with their followers. How much do you involve yourself with the fans?
I don’t buy them McDonald’s, but if someone comes up to me and tells me my music means something special to them, it touches me deeply. I don’t think of myself as anything extraordinary, so it would never go to my head; it’s just cool that someone appreciates my music in the same way that I appreciate other artists’ music. Music lovers are a special breed. We’re all fans of somebody.

The lyrics to your songs are often esoteric and cerebral, with many references to philosophy and high art, film and literature. Do you consciously write for an intellectual audience?
Not really, though I don’t try to dumb it down for an ignorant audience. I’m a fan of creative writing, always have been. I spend a lot of time working on lyrics and fine tuning them. To me, they are just as important, if not more so, than the music. A song could have boring music, but as long as it has great lyrics, it can be a great song.

Your tour schedule is grueling, yet you still manage to churn out records every three months, it seems. How do you keep up that manic level of production?
There’s always a pause in-between album/tour cycles, and that’s when I normally create a new album. It takes a long time for an album to get released, so in the time in-between a new album getting manufactured/released, usually like four months, I’m working on new material. I don’t really take a vacation from writing/recording. It’s my favorite activity, so there’s no desire to take a break from it.

For your last album, you collaborated with lovely and talented singers Solange Knowles and Janelle Monae. What was it like working with them? And are there other artists you are looking to work with in the future?
It was great working with both of them. They are both incredibly gifted artists, as well as wonderful people. It was definitely cool writing for a vocalist other than myself; I haven’t done a lot of that. I would like to work with other artists in the future. I guess on the top of the list would be Sufjan Stevens and Erykah Badu.

You all seem to have tons of side projects going on. What’s been on your plate recently?
I’ve been working on new stuff. I know that Davey and Nicolas have been hard at work on a Yip Deceiver full-length, Thayer has been working on her solo album, and K has been recording a Kishi Bashi full-length. BP and Dottie have been touring with other bands and experiencing life. Clayton has been building spirit orphanages for the displaced souls of deceased North Florida Native American children.

When I first heard that Outback commercial campaign in the mid-2000s, I was a little worried that of Montreal “sold out.” Now, I hear tons of great indie bands lending their songs to everything from Volkswagon commercials to movie trailers. Do you feel that less people begrudge you trying to make a living these days? Has your opinion of “selling out” changed since your band first started out?
To be honest, I’ve never understood how having a song in a commercial or a movie trailer could possibly equate to selling out. In my opinion, an artist can only sell out by making prosaic, middle-of-the-road music in an attempt to reach a bigger audience. Some ad agency placing one of your songs in a commercial doesn’t change the way you as an artist approach your creative process. The only real drawback of having a song in a commercial is that it potentially creates an awkward association for the listener, so whenever they hear that specific song, they might automatically think about some lame product or film or whatever it may be. It could cheapen the song for a fan, I suppose. But like I’ve said before, a true fan should be happy when they hear a song of their favorite band in a commercial, because they should know said band might have made some money out of it, and them getting that money will help to fund future albums and tours. Ideally, we’d all have wealthy patrons to support us, and we’d never have to associate our music with anything “commercial” or corporate or mundane. Absolute purity is not a virtue that most indie artists can afford.

Though of Montreal has a strong and devoted following and the band’s songs have appeared in numerous commercials and TV shows, it still seems to fly under the radar. Are you satisfied with being relatively non-mainstream, or would you like to expand your reach?
I don’t really think about stuff like that. My only concern is evolving as an artist. Too much commercial success is bad for an artist anyway; it puts unnecessary pressure on their shoulders to maintain that success. I think that’s why so many bands just keep releasing the same sort of album over and over again; they are terrified of straying from the formula that got them their initial recognition. I think artists should constantly try to defy themselves and to defy others’ perceptions of what they are. Reinvention is the key to longevity, not self-caricature. That’s what I tell myself, even though I know it isn’t actually true.

2 replies on “Q&A With Of Montreal”

of Montreal is an Athens band, not Atlanta.

i’ve been reading a lot lately and i was wondering if we could see an of montreal recommended reading list later on in the week? wouldn’t that be great? delving even more into those funky golden revelatory mind patterns… just a thought! on my current list are tales from the night rainbow, salvador dali’s 50 secrets of magic craftsmanship and percy jackson.