Anyone have any idea how long Southern Culture On The Skids has been around? Would you believe since 1983? Time flies. (Clever response: You cannot, they’re too erratic.) The current lineup of SCOTS features Rick Miller (the one constant since its inception) on guitar and vocals, bassist Mary Huff and drummer Dave Hartman. If you haven’t heard what they sound like, an educated guess that included Creedence Clearwater Revival, the Cramps, Tav Falco’s Panther Burns and Man Or Astro-Man? might be pretty close to the bone. The trio’s most recent album, Zombiefied (Kudzu), came out just in time for graves to open so the dead can have one last stagger around the countryside. Miller will be guest editing magnetmagazine.com all week. Read our brand new Q&A with him. 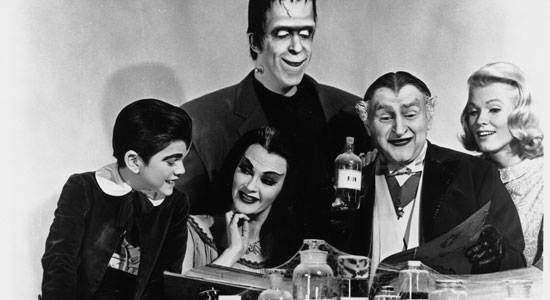 Miller: This is the best TV theme ever—part Ventures, part Henri Mancini, part Spike Jones. Monster riffs and fuzz guitar meets big band. Jack Marshall also put out some badass solo guitar records—Tuff Jack is my favorite. It swings and twangs like nothing you ever heard. Jack had one record called My Son The Surf Nut that included the songs “Teenage Vampire Surfer” and “The Monster Surfer.” He also arranged the hit version of “Fever” for Peggy Lee and produced a bunch of great Howard Roberts jazz guitar albums. Jack Marshall passed away in 1973 at the age of 51. Too bad. His son Frank Marshall was the executive producer for all the Indiana Jones movies!