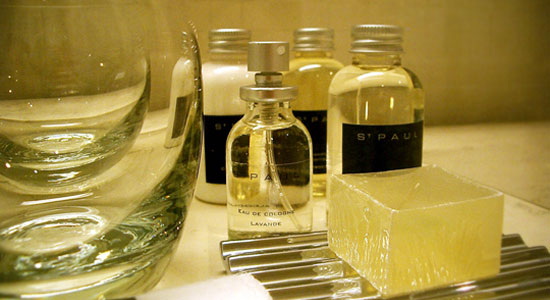 Lawrence-Brown: When you are touring for the best part of two years almost constantly, it is the little things along the way that start to become more and more important. As the status of White Lies has gradually increased over the past couple of years, it seems the quality of our hotel rooms has followed in a similar vein, and as such, the quality of the little things has also improved. I’m talking about mint shower gel, citrus shampoo, tea-tree conditioner. But all in miniature bottles! I’m talking about Nespresso coffee machines and a complimentary bottle of sparkling water. Even dressing gowns and slippers. Ok, the hotel will charge you if you try and take these last two items away with you, but for the duration of your stay in that particular hotel room, they are yours to enjoy. Recently, legendary Welsh nutcase Gruff Rhys of Super Furry Animals/Neon Neon fame has built a miniature hotel out of the miniature shampoo bottles and other items he has collected from his years of touring, which is a lovely visual representation of life on the road. It is a great feeling when you check into a slightly swankier hotel than usual and discover rows of high-class lotions and cleansing products waiting for you by the sink. You know they’re yours to keep. You’ve really done nothing to deserve them. Maybe you’ll use them, maybe you’ll put them in your wash bag in case the next hotel is a dump. It doesn’t really matter which you choose—they’re still yours. Like I said, it’s the little things.